Garda Commissioner given a week to respond to questions 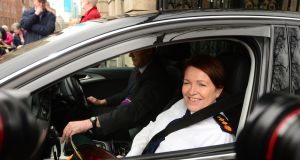 Garda Commissioner Nóirín O’Sullivan has been given until next week to provide “comprehensive replies” to a list of questions arising from her appearance before an Oireachtas committee on the breath test and fixed charge notices controversy.

There has been a litany of calls for Ms O’Sullivan to stand aside after revelations that 14,700 people were wrongly convicted of motoring offences and that gardaí had exaggerated the number of breathalyser tests carried out by one million.

Ms O’Sullivan appeared before the Oireachtas Justice Committee last week to face questions on the matter.

Arising from her appearance, committee chairman Caoimhghín Ó Caoláin has written to the commissioner seeking clarification on a number of matters. She has been asked to provide “comprehensive replies” to a list of 27 questions by noon on April 11th.

The questions include why gardaí did not seek information from the medical bureau of road safety in 2015 and 2016, even though the bureau had informed gardaí in July 2014 of discrepancies.

Ms O’Sullivan is also asked whether the publication of an article in The Irish Times in February influenced the decision of gardaí to contact the bureau.

Another question asks why Minister for Justice Frances Fitzgerald was not aware of the issues regarding the breath tests before the media was. There is also a question regarding her failure to inform the Policing Authority.

The Policing Authority said last week it was still waiting for the Garda to furnish it with internal audits on the controversy, or give “a clear sense” of how it is handling matters.

The oversight body said it was “disappointed” it had not been advised “in a timely manner” that an audit into the breath test controversy was under way.

Furthermore, it said it had not been furnished with the necessary paperwork from the Garda in relation to how it is handling these matters.