Three people due in court over shop robbery in Co Offaly 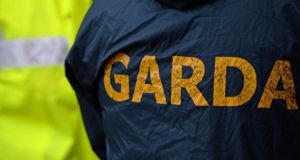 Three people are due in court charged in connection with a robbery in Co Offaly. Photograph: Frank Miller

Three people in their 20s are due to appear in court charged in connection with a robbery that took place in Tullamore, Co Offaly earlier this week.

Two men and a woman were arrested following the raid at a shop in Cappincur on Tuesday evening.

Two men entered the shop at about 9.25pm armed with a knife and a hammer. They threatened the staff and left with a sum of money, fleeing the scene in a car with a third person.

The car was driven towards Dublin on the motorway. The two men and woman were later arrested near Clonard, Co Meath after they rammed a Garda vehicle. Gardaí recovered the property taken in the robbery and the weapons used.

No one was injured in the incident.

The three remain in Garda custody are due to appear before Portlaoise District Court on Thursday morning at 10.30am.