Decision to reopen Lidl store in Tallaght ‘under review’ 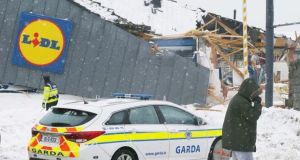 Staff at the damaged Lidl store in Tallaght won’t lose their jobs, the company has confirmed. Photograph: Stephen Collins/Collins

Plans to build a larger two storey Lidl store on the Fortunestown Lane site, Citywest are now “under review” following the damage caused to the existing store last Friday night.

The company is also considering if it will repair and reopen the existing store.

On Monday employees who worked in the Tallaght supermarket attended a meeting, where they were informed all staff would be redeployed to other Lidl stores.

“We won’t let the criminal actions of others impact on our hard working team” Lidl stated on their twitter account. The Lidl store employed around 30 staff.

The company said staff were “genuinely blown away” by the swell of support from the local community and people around the country.

Engineers from the German supermarket chain are currently assessing the damage to the store, after the roof was knocked in by individuals using a stolen mechanical digger.

A large number of people also looted the supermarket, and a steel safe was taken from the premises.

There was “significant damage” caused to the store, a spokeswoman from Lidl said. The company will await a final report from the engineers and consultants, “before making a final decision regarding future plans” she said.

Last year Lidl submitted an application for planning permission on the Fortunestown Lane site to build a larger store, to replace the current shop. The Lidl store was one of the main supermarkets in the Tallaght and Jobstown area.

“It had been our intention to build a new larger store on Fortunestown Lane. Given the events of Friday last, that decision is now under review” a spokeswoman said.

Following the incident on Friday a garda public order unit, or riot squad, were on standby in Tallaght over the weekend. Gardaí were put up in hotels to respond quickly to any incidents, but the unit was not required.