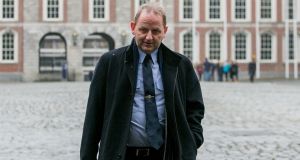 A former head of the Garda Press Office sent “hundreds” of text messages to senior officers and journalists as part of a smear campaign against Sgt Maurice McCabe, the Charleton tribunal has been told.

On his first day giving evidence, Sgt McCabe told the tribunal on Monday of a meeting he had in September 2016 in the home of Supt David Taylor, then head of the Garda Press Office.

He said an emotional Supt Taylor told him in the meeting that he had “destroyed” him on the instructions of former Garda commissioner Martin Callinan.

He said he was told that the subsequent holder of the office, former commissioner Nóirín O’Sullivan, “knew everything that was going on”.

The tribunal was established to examine whether Garda HQ conducted a smear campaign against Sgt McCabe because of his whistleblowing activities.

Sgt McCabe told Patrick Marrinan SC, for the tribunal, that he was told that senior officers, journalists and some politicians were told by Supt Taylor of an allegation of child sex abuse that had been made against the sergeant in 2006. The allegation was dismissed at the time by the Director of Public Prosecutions.

Sgt McCabe said he was told that Garda HQ was “obsessed” with him and whenever he was the subject of positive media coverage Mr Callinan would instruct Supt Taylor to get on the phone and “do him down. He has to be buried.”

Supt Taylor would then make contact with people over the phone or send them text messages, he said.

Sgt McCabe said he was told Mr Callinan wrote all the texts which Supt Taylor sent out. He was told that Supt Taylor would “always” send a copy of the texts to Ms O’Sullivan, who would always reply: “Perfect.”

At times emotional as he gave evidence about the meeting, Sgt McCabe said he was told that Mr Callinan wanted to “damn him all the time”. He said he was “furious” with Supt Taylor. “I would not do that to anybody.”

Sgt McCabe said he was told there was an intelligence file in Garda HQ on him named Oisín, which was the name of a grandson of a senior officer.

He said he went back to Supt Taylor the next day and asked if it could really have been hundreds of text. “He said it could have been thousands.”

The evidence is continuing.