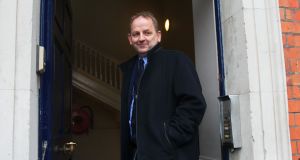 Sgt Maurice McCabe has said he was told the then Garda commissioner Martin Callinan had said he, Sgt McCabe, had abused his own children and was not to be trusted, the Charleton tribunal has heard.

The Garda whistleblower has begun giving evidence to the Charleton tribunal about his complaints concerning policing standards in Bailieboro, Co Cavan, and other matters.

He broke down and the tribunal rose for 10 minutes when he was asked to give evidence about a meeting he had in May 2016 with the chairman of the Dáil Public Accounts Committee (PAC), John McGuinness.

When the tribunal resumed Sgt McCabe said he met Mr McGuinness for coffee and was told the the Fianna Fáil TD had met Mr Callinan at the Red Cow Hotel.

He said he was told by Mr McGuinness that Mr Callina had said he, Sgt McCabe, had abused his children and his nieces and was not to be trusted.

At the time, the PAC was hearing evidence about matters raised by Sgt McCabe and had heard evidence from Mr Callinan.

Sgt McCabe said said he went home and told his wife Lorraine and that they later contacted his barrister, Michael McDowell SC. “He just said leave it with me.”

He said Mr McGuinness told him the then Garda commissioner had grabbed him by his arm as he was getting out of his car and said it was “very serious, very serious”.

The tribunal, formally known as the Disclosures tribunal, was set up in May 2017 to investigate whether or not an alleged smear campaign against Sgt McCabe was authorised by Garda HQ arising out of his whistleblowing activities.

Speaking to the tribunal on Monday, Sgt McCabe said he had received approximately 400 letters and emails of support from members of the public and had not received one item of hate mail.

However, he said he ended up “isolated and alone” when he spoke out. There was “an element that would just blank you, not speak to you”, he said. That was part of the Garda culture, he added.

He said there was a particularly strong reaction in the force when he brought up the issue of penalty points. It was felt he “shouldn’t have gone there”.

Sgt McCabe said the “floodgates were opened” after a comment was made by the then Garda commissioner Martin Callinan at the Dáil Public Accounts Committee in January 2014.

During his appearance before the committee to discuss Garda whistleblowing, Mr Callinan said he found it “quite disgusting” that corruption, malpractice and other charges were being levelled against Garda officers by members of the force.

Sgt McCabe told the tribunal he watched the committee proceedings on TV. “It was hard to take. It was extremely hard to take.”

He told Mr Marrinan that he did not know at the time that the following day Mr Callinan met in a car park with the chairman of the committee, John McGuinness.

He said if he could start all over again he would not have spoken out about the penalty points issue in 2008, as “it was at that stage that I started to get all the hassle”.

He said that it was “awful” when reports appeared in the Irish Independent that referred to calls for an inquiry into the competence of the investigation into an allegation that a Garda had been involved in a sexual assault on a girl.

Although no one was named, Sgt McCabe said, he knew it was a reference to him and that it was connected to his whistleblowing activities. “It was very hurtful.”

At the outset of the tribunal, Sgt McCabe was asked about the dismissed claim of child sex abuse made against him in late 2006 by the daughter of a Garda colleague, before being taken through a succession of complaints that he made over subsequent years.

Wearing his Garda shirt with sergeant stripes, Sgt McCabe responded to questions from Patrick Marrinan SC, for the tribunal.

He is expected to give evidence today and tomorrow.

The tribunal heard that two meetings he held with Garda officers to discuss his concerns were secretly taped by him.

Transcripts of the meetings were read out at the tribunal.

The tribunal heard that following a complaint by Sgt McCabe a Garda colleague was moved to new duties.

Later that same year, 2006, the colleague’s daughter – being called Ms D — made a historical sex abuse allegation against Sgt McCabe.

The allegation was investigated and dismissed by the Director of Public Prosecutions (DPP). Sgt McCabe said he was very happy with the outcome but was annoyed at the time that his colleague who had investigated the case, Insp Noel Cunningham, had not told him immediately of the DPP’s decision even though they were working together at the time.

“It wasn’t a major issue, but I was annoyed,” Sgt McCabe said.

He said he had had no difficulties with Insp Cunningham up to then. He had been working alongside him for a fortnight and the inspector had not told him of the DPP decision.

“It was a very important issue in my life.”

On October 17th, 2007, the mother of Ms D was asked by Insp Cunningham to leave a courtroom when she turned up when Sgt McCabe was there.

Sgt McCabe said he “felt intimidated” by her presence. Two days later he was followed on the street by Ms D and went into the Bailieboro station to get away from her.

“I felt it was awful. I couldn’t understand it,” Sgt McCabe said. The two women were cautioned after this incident and nothing further occurred.

In November 2007 Sgt McCabe wrote to Supt Michael Clancy of Bailieboro station about inadequacies in an investigation of an assault.

Supt Clancy responded agreeing that it was an unsatisfactory investigation and the Garda concerned was reprimanded.

On January 28th, 2008, Sgt McCabe brought a list of 21 complaints to the attention of Supt Clancy about policing standards in Bailieboro and the two men discussed them for more than an hour.

The complaints included such matters as members not turning up on time, not doing foot patrol and poor police inquiries.

In February of that year, Sgt McCabe complained about the quality of an inquiry into another assault incident. Later that month he drafted a document outlining his troubled history with Ms D’s father, Mr D, and concerns Sgt McCabe had about his behaviour.

He said he was asked by Mr Cunningham to do this as it might help convince the DPP to consent to, against protocol, releasing its findings dismissing the Ms D allegation. Sgt McCabe was later told by Mr Cunningham that he would not be able to get the document released to Sgt McCabe and the D family.

In March 2008, Sgt McCabe wrote a letter saying he wanted to leave his position as sergeant in charge of Bailieboro. He felt that he was not getting support in dealing with the matters he had complained about.

In March 2008, he wrote a letter complaining about the inappropriate use of the internet by colleagues at Bailieboro. In April 2008, Sgt McCabe made a 15-page complaint of harassment, bullying, discrimination and victimisation at the hands of Supt Clancy and Garda management.

It was decided that the claim would be investigated by Chief Supt Terry McGinn. In May 2008, Sgt McCabe supplied Mr McGinn with a 20-page statement.

In July 2008, Sgt McCabe moved to new duties in Mullingar. He told the tribunal that prior to his moving, some of his colleagues in Bailieboro knew he was making complaints about standards at the station. He said a few of his colleagues agreed with him.

Later that year he made a complaint to the office of the Confidential Recipient which included a complaint against Chief Supt Colm Rooney. Assistant commissioner Derek Byrne was appointed to investigate the matter.

In 2009, the Anglo Celt newspaper carried a report in which Chief Supt Rooney referred to reports in the local and national media about problems with the standard of policing in Bailieboro.

“It was absolute rubbish what was in those reports. It was factually incorrect,” he was reported as saying. Sgt McCabe said he was concerned when he read the quotes and wrote to the then minister for justice, Dermot Ahern, seeking an independent person to investigate his complaints.

In March 2010, Sgt McCabe was told that an inquiry conducted by officers Byrne and McGinn had upheld 11 of 42 complaints made by the sergeant.

In 2012, Sgt McCabe made a complaint against the then Garda commissioner Martin Callinan because of his alleged role in placing Supt Clancy on a promotions list.

This complaint was brought to the attention of the then minister for justice Alan Shatter. Sgt McCabe also made a serious allegation against Mr Byrne.

The O’Higgins Commission, which in 2015 investigated a range of complaints made by Sgt McCabe, found that the complaints against the Garda officers were unfounded.

Sgt McCabe is continuing his evidence.