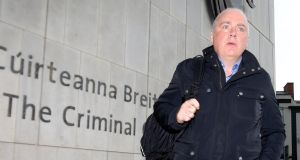 David Drumm arriving at the Criminal Courts of Justice in Dublin on Wednesday where Judge Karen O’Connor jailed him for conspiracy to defraud and false accounting. Photograph: Collins Courts

The former chief executive, who led what was once Ireland’s third largest bank, spent his first night behind bars in Dublin’s Mountjoy Prison as prisoner number 102640.

At Dublin Circuit Criminal Court, Judge Karen O’Connor jailed Drumm, who led Anglo as it edged towards collapse in 2008, for conspiracy to defraud and false accounting for transactions he “directed” at the peak of the banking crisis.

She said the 51-year-old Dubliner engaged in “grossly reprehensible behaviour” by authorising, directing and being actively involved in a “dishonest and fraudulent scheme” that created the “false and misleading impression” that Anglo was €7.2 billion stronger than it actually was in September 2008.

Handing down a sentence that was 2½ years longer than a jail term given in 2016 to his one-time second-in-command at Anglo, the judge said Drumm as chief executive held “a position of trust” and that the public had to be able to trust its banks and make decisions on the information they published.

“Mr Drumm along with others put together a dishonest scheme and engaged in transactions designed to inflate deposits from a non-banking entity to Anglo Irish Bank on September 30th, 2008.”

The evidence from Drumm’s 87-day trial showed he was “the driving force in Anglo Irish Bank” and the person behind the funding initiatives, she said.

“He authorised the transactions, was at the helm of the bank, and clearly extremely ‘hands-on’ in his position in the bank.”

She described his offending as “premeditated and planned”.

The judge stressed that the court was not sentencing Drumm “for causing the financial crisis” or “for the recession which occurred” but for specific offences that did not cause Anglo’s collapse.

She felt the “appropriate headline figure” for both offences was eight years’ imprisonment but imposed a six-year sentence considering Drumm’s lack of previous convictions and other mitigating factors.

“He has lost his reputation, which will encroach on any future employment opportunity. This is difficult for him on a personal level in circumstances where he was respected within the banking industry,” she said.

Drumm’s motivation behind the transactions to keep Anglo open was “irrelevant”, she said, and no excuse for “fraud and dishonestly”.

Prior to sentencing, Drumm’s counsel Brendan Grehan said the former banker accepted that had made “a huge error of judgment” but he could not admit to having a dishonest intent he never had.

Pleading for leniency, he said Drumm’s sentence would “reverberate” not just in Ireland but further afield and that he would carry the notoriety “for the rest of his days”.