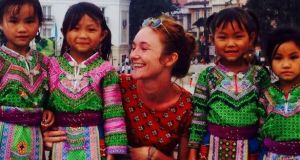 Danielle McLaughlin (28) was raped and killed in Goa on the west coast of India in March 2017.

The Co Donegal family of murdered Irish tourist Danielle McLaughlin said they will never closure regardless of what happens in the legal case linked to her death.

On Monday Danielle’s mother said she heard about her daughter’s death when family friends called to the house.

Danielle McLaughlin’s body was found on a beach in Goa on March 14th, 2017. She had been raped and murdered. A 24-year-old man has been arrested in connection with the death and is awaiting trial.

She was last seen a day before her body was found, dancing at a party on the beach to celebrate Holi, the Hindu spring festival of colours.

Her mother said she will not let her daughter’s voice be silenced.

She told RTE’s Today with Sean O’Rourke show that she found out about her daughter’s death when family friends called to the house after they read local news reports about it on Facebook.

Her mother said Danielle, the eldest of six sisters, messaged her every day, her last communication being on the day before her death when she wrote she was in a safe part of Goa, she was with friends and was very happy.

“I still message her. It’s difficult to accept that she’s never coming home. My heart wants to believe she will walk through the door.”

Her mother described Danielle as very trusting and said she showed great kindness to everyone she met.

“Danielle was amazing, she was a bright light, always singing and dancing. She sparkled and had so many friends. She always wanted to travel. She didn’t want to settle down.”

Andrea expressed her thanks to the Kevin Bell Trust, a fund which assists families in repatriating the remains of their loved ones who die abroad.

“We got her home fast thanks to the Trust. I went to the funeral parlour, but I saw a girl I didn’t recognise.”

She added the grief never ends and that there was a constant pain in her heart that aches with the loss.

“I go to bed every night hoping that Danielle will come to me in my dreams.”

Danielle’s younger sister Jolene said the last year had been very difficult for the family. “I miss her all the time. There is so much I want to tell her. She used to say that I was her first ever best friend.”

Jolene said she could not understand how something so awful could happen to such a lovely person.

Since her sister’s death Jolene has also traveled as she knew Danielle would want her to go out and see the world. However, she said she is not as trusting as her sister. “I don’t trust as easily as she did.”

Andrea said the family is happy with the Indian legal system where they have the right to legal representation in the forthcoming murder trial. “I would like to know what really happened.”

She said she would love “whoever did this to give empathy and reach out to tell me why.”

The family has undertaken fund raising to defray their legal costs. www.truthfordanielle.com