‘Some of the social media commentary has been gratuitously abusive, and an attempt to usurp the role of the jury’ 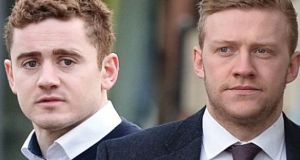 After a 42-day trial at Belfast Crown Court, Paddy Jackson (left) and Stuart Olding were found not guilty of raping a then 19-year-old woman in 2016.

A lawyer for one of the two Ireland and Ulster rugby players at the centre of the Belfast rape trial has described some of the social media commentary surrounding it as “gratuitously abusive” and “an attempt to undermine the verdict”.

Stuart Olding’s solicitor Paul Dougan said: “The continuing fallout from the case is almost as unprecedented as the case was itself. Since Wednesday, some of the social media commentary has been gratuitously abusive, and, from certain quarters, an attempt to undermine the verdict and usurp the role of the jury.”

After a 42-day trial at Belfast Crown Court, Mr Olding and his Ireland and Ulster rugby colleague Paddy Jackson were both found not guilty of raping a then 19-year-old woman in 2016.

Mr Jackson’s solicitor Joe McVeigh of KRW Law already signalled plans for legal action against Labour Senator Aodhán Ó’Riordán over an alleged defamatory tweet which was subsequently deleted. Moreover, his lawyers have also said they will not hesitate in taking action against anyone who posts defamatory comments about their client online.

This has prompted a defiant response from some Twitter users who started using the hashtag #SueMePaddy, a slogan that was taken up by some campaigners at marches at the weekend.

Mr Dougan told The Irish Times the jury had given a true verdict according to the evidence and that people choosing to comment on the case should do so within the law.

“Anyone who chooses to take to the airwaves, the street corner or social media platforms must do so within the parameters of what the criminal and civil law permits,” he said. “The wider public, who did not hear any part of the evidence and who have formed their opinion not by reference to the evidence, but by what they read about the evidence should remember that the jury – who were the tribunal of fact in this trial – swore an oath to faithfully try the defendants and to give a true verdict according to the evidence. That is precisely what happened. People should reflect upon that as they use their smartphones and Twitter feed to comment upon this case.”

Both men have been unable to play rugby since the legal process began. Through their lawyers, they have indicated their desire to return to the field as soon as possible.

Senior representatives from the IRFU and Ulster Rugby have formed an internal review committee to determine findings around the men’s future.

Belfast-based sports barrister Robert McTernaghan, who also practises in Dublin, said he was not privy to the details of the private contracts. But possible options included the players being allowed back to play or agreeing to part company before their contracts end, understood to be in June 2019.

The IRFU and Ulster Rugby could, if the players have breached any of the terms of their employment, decide to sanction them with the powers that were available to them.

Sporting sanctions could include fines, a period of suspension, or the ending of a contract.

“Potentially it could end up at an employment tribunal if the parties don’t agree,” said Mr McTernaghan.

Review processes vary across different sports with some concluding within weeks, but it was not unheard of for some to take many months due to a party involved exhausting all options at their disposal.

“As they are employees, they would have a right of appeal in any possible employment setting,” said Mr McTernaghan.