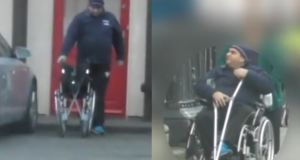 Screengrabs of video footage of Constantin Iosca shot by a security firm on behalf of the MIBI.

A man has withdrawn a motor insurance claim after a court hearing was shown video evidence of him walking around without the crutches or wheelchair he had used in pursuing his case.

On Tuesday Mr Iosca withdrew the action in which he claimed his bicycle was in 2016 struck by a car which could not be traced. It is understood he was seeking more than €60,000 in damages. He claimed to have suffered serious back pain after his bike was struck by the car.

On Friday, after the court was shown video footage of Mr Iosca shot by a security firm on behalf of the MIBI, Mr Justice Kevin Cross adjourned the case until Tuesday and said the parties might discuss the matter.

The video showed the plaintiff walking to a car, removing crutches from plastic wrapping and picking up a wheelchair before placing it in the boot.

Later arriving in Dublin city centre, he is seen getting into the wheelchair and being pushed to a building where his medical appointment is taking place, according to a breakdown of his movements provided by the MIBI.

It also shows him using the crutches to climb the steps but sometime after the medical appointment he is recorded in another part of the city walking unaided.

Later returning home, Mr Iosca lifts the wheelchair and crutches out of the car and brings them into the house.

On Tuesday, counsel for Mr Iosca told the court his client was withdrawing the case.

Counsel for the MIBI said his side were looking for their costs against Mr Iosca.

Mr Justice Cross noted the case had been withdrawn and he awarded costs to the MIBI against Mr Iosca.

Last week, Mr Iosca told the court he suffered serious back pain and considerable disruption to his life as a result of the being hit by a car while cycling at or near Skerries Road in Lusk on June 1st, 2016. The car was never traced, the court heard.

He said he was brought by ambulance to the emergency department at Beaumont Hospital in Dublin where he was kept overnight for observation and discharged the following day on crutches.

In the video shown to court he was shown walking his dog and walking near his home in November 2018.

In another video taken in January 2019, he was being pushed in a wheelchair to an office in Dublin city centre and using two crutches to mount some steps into the office with assistance from others.

Later, that day he is shown in another part of the city walking with two others without crutches and also driving his car home. The MIBI denied his claim.

In a statement issued after the case was withdrawn, MIBI chief executive David Fitzgerald said: “Thanks to a comprehensive investigation, we were able to provide evidence which strongly rebutted the claim being made. “Suspicious claims simply won’t be accepted by the MIBI. We will put considerable resources into establishing if the evidence actually supports a claim we believe is questionable.”

Established in 1955, the role of the MIBI is to compensate victims of road traffic accidents caused by uninsured and unidentified vehicles. All insurers underwriting motor insurance in Ireland are required to be members.

It is funded entirely by motor insurance companies, ultimately through the premiums paid by drivers.

Legal representatives for Mr Iosca did not respond to a request for comment. – Additional reporting: court reporters