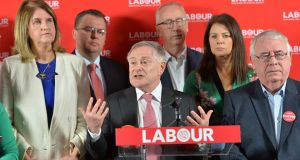 The Labour Party has said it will not make “grandiose promises” on tax cuts but will instead focus on a multi-billion euro programme for housing, health and childcare if it is part of the next government.

Party leader Brendan Howlin said the tax promises of other parties represented a “con job” as he hit out at Fine Gael for “squandering the economic recovery” and for overspending at the new national children’s hospital “which should never have cost as much as €2 billion.”

“We need a children’s hospital. But we do not need the most expensive hospital on the planet,” Mr Howlin said.

The party published its election manifesto on Tuesday morning and has promised to build 80,000 homes on public land over the next five years through a €16 billion fund.

This fund will be partly made up using €5 billion from the Ireland Strategic Investment Fund and €4 billion redirected to housing from the “rainy day” fund.

The party has also said it will provide funding for local government to deliver a home insulation scheme that will eventually reach a target of 100,000 homes a year.

The party also reiterated its proposal for a three-year rent freeze alongside temporary rent caps, and reiterated it will maintain the State pension age at 66.

Labour has also proposed a reform of the Constitution and for the series of resulting changes to be put to the people in an omnibus referendum.

However, Mr Howlin acknowledged the plan may be “lofty.” According to the manifesto, the party plans to set up a convention to propose a modernised constitution.

“Rather than continue with piecemeal change to the Constitution, we will ask groups of citizens and experts to listen to the wider public and write-up recommendations for whole scale modernisation and reform of the Constitution.” “We will put the revised Constitution to the people in an omnibus referendum.”

Mr Howlin said “maybe that is a bit lofty. We do a lot of thinking in the party. Rather than endless patching and fixing to societal changes we need to have at least a conversation.

“I am not saying it will actually happen but we should give time and space to considering it.” It also says it would organise future European elections using a single national constituency.

On justice, the party says it would conduct a “cost benefit” review of commissions of investigations and special inquiries and it will “wind down those that are unlikely to justify the legal cost.”

On health, the party has pledged to end what it describes as the “de facto HSE recruitment embargo” and to “implement an investment plan to deliver more hospital beds.”

Mr Howlin said the manifesto had been costed and that overall their five year spending plan amounted to €13 billion. Other commitments in the manifesto include extending the sugar tax to other processed foods, using that money to fund free primary school meals and withdrawing income tax credits for those earning more than €100,000.

They also want to double the bank levy.