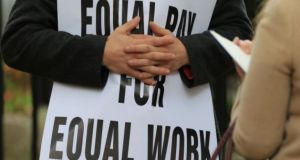 A teachers’ union has claimed a new survey shows the damage caused to the education system by the two-tier pay system for teachers. File photograph: Nick Bradshaw

The staff recruitment and retention problem in the education sector is getting worse with four out of five schools receiving no applications for advertised posts, the Teachers’ Union of Ireland (TUI) has said.

The union said the findings of a new survey showed the damage being caused to the education system by the two-tier pay system for teachers in schools. It said this was “the single greatest cause of the teacher supply crisis”.

TUI members in second level schools, institutes of technology and centres for further education are to stage a one-day strike on February 4th in protest at what the union described as pay discrimination.

The stoppage is expected to lead to the closure of hundreds of schools across the country next Tuesday.

The TUI said a survey of over 130 second-level schools in December 2019 and January 2020 by the Principals’ and Deputy Principals’ Association of the union found 97per cent experienced teacher recruitment difficulties in the previous six months.

It said that 49 per cent of schools had experienced teacher retention difficulties in the previous six months.

The TUI said the survey had found 77 per cent of schools advertised positions in the previous six months for which no teacher applied.

It said this was up from 68 per cent in a previous survey carried out in April 2019.

The union said 56 per cent of schools who took part in the survey had unfilled vacancies due to recruitment and retention difficulties – up from 47 per cent in the April 2019 survey.

The union said the subject areas which were experiencing the most severe recruitment/retention difficulties were Irish, home economics, French, mathematics and Spanish. Following these, there were also issues in biology, physics, chemistry, German and PE.

TUI president Seamus Lahart said: “Ahead of TUI’s national strike over pay discrimination next week, these findings make clear the severe damage that the injustice of the two-tier pay system is doing to the education system and the service to students.

“Alarmingly, if predictably, the situation has worsened over the time period since the same survey was last carried out in April 2019. The two most damning findings show that almost four out of every five schools advertised positions to which no teacher applied, while over half of schools have unfilled vacancies due to recruitment and retention difficulties.

“Graduates who might formerly have chosen teaching are now looking at different options, with schools in both urban and rural areas routinely struggling to attract applicants to fill vacant positions,” he said.

The Government has undertaken a number of initiatives to deal with the two-tier pay issue, but the TUI said the largest pay discrimination still occurred in the early years of employment “with new entrants to second level teaching earning 14 per cent less on initial appointment and 10 per cent less in the first 10 years than they would have before the imposition of a two-tier pay system”.

The TUI said the only way to resolve this issue was “to end the divisive, irresponsible and damaging practice of paying colleagues different rates for carrying out the same work”.

“Irrespective of how the new Government is constituted, a commitment to an immediate ending of pay discrimination must form part of its programme.”

Last weekend another teaching union the ASTI decided it would ballot its members for strike action over the two-tier pay system in schools ,although it will not be involved in the stoppage next Tuesday.

The ASTI issued instructions to members including principals and deputies not to provide cover for their striking colleagues during the fstoppage by TUI members on February 4th.

The ASTI told members they should turn up for work as normal on February 4th on the basis that if they refused to work on the day, they would be deemed to be engaging in unofficial industrial action.

Crucially, the union guidance states that “no member of ASTI, including principal teachers, deputy principal teachers and/or other post holders may undertake any duties that are normally done by colleagues who are members of TUI”.

The union’s instruction to members also stated: “No ASTI member can undertake the supervision/substitution duties of an absent TUI colleague on 4th February who will be engaged in industrial action. Redesign of the roster with a view to having ASTI members cover supervision slots normally undertaken by TUI colleagues is not acceptable.”

The move means that most secondary schools will shut on health and safety grounds, even if only a small number of teachers are TUI members.