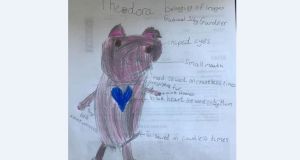 A detailed drawing of the missing pig teddy, Theodora, drawn by her ’distraught’ owner Imogen.

Her head and tail have been sewn on countless times, her eyes are chipped and her blue heart has been “sewed on by Mum”.

Theodora is a much-cuddled pig teddy, “once pink but now grey with love”, who was lost at Dublin Airport.

Last seen between T2 security in the airport on January 23rd and US preclearance, the “utterly irreplaceable” toy should have departed on a flight to Seattle last Thursday but is now “missed by a distraught child”, Imogen (9).

“Theodora MUST be somewhere, so perhaps your readers might be able to help,” appealed Catherine Hargreaves on behalf of her granddaughter.

The family has posted social media appeals describing Theodora and detailing her last known movements. Imogen’s mother Elizabeth Gardner said: “She is a pig teddy with a star on her foot and a sewn on heart to cover a hole (from being cuddled so much) her tail shows signs of repeated sewing back on, and so does her head.”

“We went to the Loop, Burger King, Sunglasses Hut and WH Smith.”

A detailed and colourful photo-fit has been drawn by Imogen’s own hand.

It shows one of Theodora’s limbs has a “tiny hole”, described as almost invisible by the talented artist, and a “little metal star on her foot”.

She also has “pink hooves”, “grey/pink fur” and a “small mouth”. Her tail and head have been “sewed on countless times”, while her blue heart was “sewed on by Mum”.

WH Smith responded to Ms Gardner, saying: “We are sorry to hear that Imogen has lost Theodora.

“The only thing we can suggest is if you have lost any property at Dublin Airport, contact the Lost Property team...Fingers & toes crossed!”