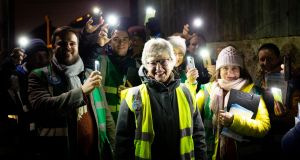 Minister for Children and Youth Affairs Katherine Zappone and her team canvassing in Rathfarnham, Dublin. Photograph: Tom Honan for The Irish Times

On a frosty and dark January evening, Katherine Zappone is racing up and down Ballyroan Road in Dublin wearing a hi-vis jacket and an expression of fierce determination.

She doesn’t dally on the doorsteps and prefers to quite literally race from house to house. As the only Independent female member of Cabinet, she is instantly recognisable to many people.

At the first door she is told: “Being honest, I don’t know a huge amount about you. I’ll look you up more,” a man says before complimenting her for “toning down your hair”.

Then, she took the fifth seat in Dublin South-West despite two rechecks called for by Fine Gael, whose candidate Anne-Marie Dermody lost out by 152 votes. She got over the line thanks to transfers from another Independent candidate. This time she is hoping her record in office will put her in a stronger position.

I think that having been a member of Government and a Minister, there’s a positive and a negative

She has had notable successes including her handling of the illegal adoptions controversy. It hasn’t all been positive, however. At the end of the last Dáil term there was anger from childcare providers over rising costs and what the sector perceived as a lack of sufficient support. Has she suffered because of this, and has her support base changed in the past years?

“I think that having been a member of Government and a Minister, there’s a positive and a negative. The positive is that I have, I think, a very strong profile in the constituency as well as nationally. But the other side of that is that obviously there’s so much change that people want and that they didn’t get in the current Government. I was a member of the Government. And I’ve always said that I accept that collective responsibility, even though I may have argued for other things that didn’t come to pass.”

I said to him, you are driving me to do something I have never done in my life: vote Fianna Fáil

Childcare is a significant issue for the constituents of Dublin South-West, but there is one issue that dominates above all else.

“I don’t usually talk to politicians. But housing is too important, it is too important. I had Fine Gael here the other day, there was nearly a row here. What’s his name, I can’t think of his name . . .”

Outgoing TD Colm Brophy is who he is talking about.

“I said to him, you are driving me to do something I have never done in my life: vote Fianna Fáil. That’s because of housing. How the bloody hell can it not be sorted. I heard Micheál Martin saying public housing doesn’t leave a bad smell in their noses like it does for Fine Gael, and I think that is true.”

He continues: “I am so annoyed. We did it before, what is it we have, the fifth-highest number of billionaires? There is something radically wrong.”

His daughter has come home from travelling with her husband and they are “struggling to buy what was social housing of the 1950s”.

Zappone says the next government needs to pursue affordable rentals and affordable homes “in a much more vigorous manner”.

She sprints to the next house, sending gravel flying behind her, but just before she does, she says: “It has awakened the social conscience, frankly.”

A while later a woman tells her she is worried about the different political parties effectively promising the earth, moon and stars in the election.

“The traditional party isn’t as important to me as it was. I was brought up Fianna Fáil, I was taken by my father to shake de Valera’s hand. It will be hard to see who I will vote for. It might be a mixture of different parties but it will be the soundest people.”

It was the Taoiseach who set up the [latest] citizens’ assembly on gender equality. It was his initiative

If Zappone is re-elected she is hoping to make it back into Cabinet, and indicates she is not wedded to Fine Gael.

“I would be open to talking to any of the parties that may be looking for Independents. And then after that . . . it really is a matter of the negotiation, what’s on offer.”

She praises the Taoiseach, Leo Varadkar, and says he is socially progressive, and while she did not always agree with the Fine Gael approach, she found a way through.

“I have had a very respectful relationship with him. I think he is very focused on getting the job done.

“I mean, it was the Taoiseach who set up the [latest] citizens’ assembly on gender equality. It was his initiative. So yeah, you know, I think he is genuine in terms of that progressive approach.”

She said the other issue she encountered was that Fine Gael is a party that is “more fiscally conservative than my approach but I have found a way to work with them”.

At the end of the canvass she makes a final pitch to a voter, telling them that as a Minister she has been in a position to access the relevant people in a bid to influence policies that matter in the area; in this case the conversation is around disability supports.

She has their vote, she’s told, and off she races to the next estate.