A Doctor Writes . . . virus can spread between humans but unclear if it can do so during incubation period 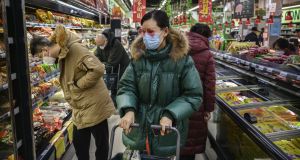 A woman wears a protective mask and sunglasses in a supermarket in Beijing. Photograph: Kevin Frayer/Getty Images

The novel coronavirus, first identified in the central Chinese city of Wuhan, continues to spread rapidly. But it is also emerging in other countries: in Europe, France and Germany have confirmed cases of the new infectious disease.

As the numbers climb, the possibility of a worldwide pandemic of 2019- NCoV (the official name given to the new virus) increases. So what are the most recent developments?

Latest figures show 4,515 confirmed cases of 2019- NCoV, of which some 976 are considered examples of severe infection. So far, 106 people have died as a result of infection with the new virus. And there are almost 7,000 suspected cases, with some 48,000 people, who were in close contact with confirmed cases, being carefully monitored to see if they develop symptoms.

Common signs of infection with the new coronavirus infection include fever, cough, shortness of breath and breathing difficulties. In more severe cases, infection can cause pneumonia and severe acute respiratory syndrome, at which point the patient requires intensive care.

But an interesting feature has already emerged: unlike most viral infections, the new coronavirus is not affecting the upper respiratory tract. In other words, those affected do not experience a runny, stuffed-up nose, runny eyes or a sore throat.

It looks as if the new microbe preferentially attacks the lower respiratory tract, so that cough, shortness of breath and difficulty breathing are the symptoms to look out for.

Coronaviruses in humans usually spread from an infected person through the air via coughing and sneezing, touching or shaking hands, touching a surface exposed to the virus and then making contact with the eyes, nose or mouth.

It is clear that 2019-NCoV can spread directly from person to person. What remains open to confirmation is whether the new virus can spread during its incubation period – before the newly infected person develops any symptoms.

What isn’t in doubt is the significant jump in cases that has occurred in recent days. In China, some 1,771 cases were added, while the number of deaths increased by 26 to 106. This trend is likely to continue in the short term.

And the first confirmed case in Germany is significant from a transmission perspective: the patient has no history of travel to China, but was in contact with a Chinese colleague in Germany. It is the first case of transmission occurring on the European continent.

As you would expect with an emerging infectious disease a number of key questions remain to be answered:

Will it be possible to largely contain the virus within China?

That’s very difficult to answer at this point. Some experts have expressed the view that the more we learn about 2019-NCoV, the greater the possibility that transmission will not be able to be controlled with public health measures. Agencies such as our own Health Protection Surveillance Centre (HPSC) need to plan for the possibility that the virus won’t be geographically containable.

How long between when someone gets infected and when they develop symptoms (the incubation period)?

Research published by scientists in China estimate the incubation period to be between four and five days. And a paper published last Friday in The Lancet, estimated the incubation period in a cluster of six family members to be three to six days. This would explain why a number of travellers who have imported the virus into other countries only realised they were sick a day or two after getting to their destination.

How lethal is the new infection?

Although the numbers are relatively small in statistical terms, it seems that 2019-NCoV could be causing serious illness in a significant number of those infected. Figures from China suggest about 17 per cent of total cases were severely ill. The death rate is running at 3 per cent. But it is too early to draw conclusions about the lethality of the virus.