McGinley deaths: ‘I will always remember your three happy faces’ 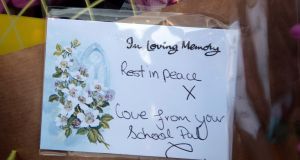 A message attached to a bouquet left at the house where the three McGinley children’s bodies were found in Newcastle, Co Dublin, last Friday. Photograph: Colin Keegan, Collins Dublin

Sporadically they arrived at the empty church, mothers and their children, to sign the book of condolences for the young McGinley siblings.

Many of them did not want to talk about why they were there, not in front of the youngsters. Too difficult.

In the book just inside the door of the St Finian’s Church on Monday afternoon some of the messages were in children’s handwriting.

Testament to how the community in Newcastle had rallied, there were well over 20 pages packed with messages of condolence since the book opened over the weekend.

“With all my heart I hope you find peace,” wrote one entry from a neighbour and occasional child minder. “I will always remember your three happy faces.”

The children – Conor (9), Darragh (7) and Carla (3) – were repeatedly remembered as “little angels” and the number of entries signed off by families as opposed to individuals stood out.

“Rest easy baby girl you were always our angel,” one person wrote of the late Carla. Another spoke of her as “the sparkle in the room”.

Outside, the sombre setting of a grey church against headstones and icy drizzle was broken by the high pitch of young children playing in the adjacent schoolyard.

A tearful woman who knew Andrew McGinley, the children’s father, said she hoped he was strong enough to deal with what had happened.

“I know the place is special,” she said of the community and its instant response. “There is a lot of care; there is a lot of love and support being offered. Especially from what I read [in the book] in there.”

At the small Parsons Court estate where the family had lived there was a sense of some kind of normality returning – piles of flowers remained stacked outside the family home but the Garda tape was gone and children hung about next to the green.

At the church as people came to sign the book of condolence a question hung in the air. Could the community ever really recover from something like this?

“You have to, don’t you? Life goes on,” said another woman plaintively. Like everyone on Monday, she did not wish to give her name. She pondered the mood of the town over the last few days: “It was total sadness... dark”, she said, and went inside.

A neighbour of the McGinleys said people were still wandering around dazed. “I was just saying to my wife, it’s so odd to be getting up and going to work.”

The ripples of the tragedy reached farther afield too. Damien, from Co Carlow, knew he would be passing the area and decided to sign it. He has three young children.

“It’s no big thing to just come off the road,” he said.

1 Miriam Lord: You cannot cocoon democracy – or can you?
2 Ireland has strategy to ‘break the chains’ of coronavirus - WHO’s Mike Ryan
3 ‘Everyone still thinks it’s a joke’ - parents of toddler with coronavirus speak out
4 Varadkar: Decision next week on relaxing coronavirus restrictions
5 UK makes another coronavirus U-turn but doubts over strategy linger
Real news has value SUBSCRIBE