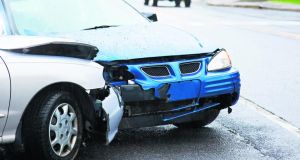 Fraudsters who staged a crash to collect an insurance payout had to get one of the cars to smash into the other vehicle a second time after the first impact failed to cause enough damage, a court was told.

Patrick Browne (52) was given a two year suspended sentence and his wife, Eileen (49) was told that she will do 240 hours community service if deemed suitable after both of them pleaded guilty to involvement in the scam.

The couple from Ballybeg West, Buttevant, Co Cork both pleaded guilty to one count of deception and one count of making a false report to gardaí in relation to a staged two-car collision at Monastery Hill, Rochestown in Cork on December 6th, 2011.

The couple were the first of a number of defendants to be sentenced for their part in the scam which was uncovered by gardai in Cork following a lengthy investigation, codenamed Operation Nascar, into suspected staged car crashes.

Sgt Noel Madden told Cork Circuit Criminal Court that gardaí became aware of a scam involving people making false insurance claims on foot of “orchestrated traffic accidents” and mounted a surveillance operation at the scene of one of the planned crashes.

Sgt Madden told how gardaí videoed the crash in which the Brownes were travelling in their white Peugeot van when they were hit by another vehicle driven by another person following on behind them.

While there was only one person in the car that crashed into the Browne’s at the time of the collision, two other people then arrived on the scene and got into the vehicle. All five people made claims on their insurance, he told the court.

Elizabeth Browne’s barrister, Sinead Behan said the incident was entirely out of character for her client. She was under pressure with a large mortgage after her husband became ill and when an opportunity for easy money presented itself, she seized it to her great regret.

“She was asked to partake in the accident by her husband. She has been extremely anxious, stressed and agitated. For certain defendants it take more of a toll than on other others,” said Ms Behan.

Donal O’Sullivan BL for Patrick Browne said they had to sell personal property to raise the €22,500 necessary to pay back the insurance company and his client had to sell his SUV. Browne believed it was probably the most stupid decision he had made in his life, he said.

Judge David Riordan noted that both accused had pleaded guilty and saved the State the expense of a trial. Neither of the Brownes had any previous convictions.

However he said that it was not a victimless crime as the insurance company was at a loss and given that insurance companies charge for policies, other genuine customers end up paying for the spurious claims.

“As the ad said some years ago, they were putting their hand in your pocket. This is a case in point. This is effectively what they were doing,” he said.

Eight other defendants also pleaded guilty to similar charges arising out the Rochestown incident and two other staged traffic collisions in Mallow and Mitchelstown. All eight have been remanded on bail for sentence later in the month.