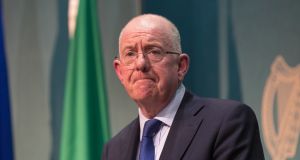 Minister for Justice and Equality, Charlie Flanagan, at a media briefing on the publication of the Data Protection Bill. Photograph: Gareth Chaney/Collins

Public bodies, including Government departments and agencies, will be exempt from fines where they breach people’s data protection rights, under new legislation.

The Data Protection Bill 2018 makes provision for people to seek compensation in the Circuit Court for breaches of their data protection rights. The Bill gives effect to two new EU regulations: the General Data Protection Regulation (GDPR); and an associated directive* on the processing of personal data for law-enforcement purposes.

However, only private-sector bodies will be exposed to the large fines provided for under EU law from May.

Public bodies will be subject to fines only where they are acting in competition with a private company.

Data Protection Commissioner Helen Dixon said last year it was a “serious matter of concern” to her that proposed that administrative fines would not be imposed on public bodies and authorities.

“The purpose of the punitive fines provided for in the new law is to act as a deterrent to all types of organisations, and we see no basis upon which public authorities would be excluded, particularly given that arguably higher standards in the protection of fundamental rights are demanded of those entities,” she told the Oireachtas Committee on Justice during pre-legislative scrutiny of the general scheme of the Bill.

In its report on the scrutiny of the legislation in November, the justice committee recommended that in view of Ms Dixon’s concerns, consideration should be given to making public bodies subject to fines where they breached data protection law.

Speaking at Government Buildings following the publication of the Bill on Thursday, Minister for Justice Charlie Flanagan said that under GDPR, people would have more control over their personal data and businesses would benefit “from a level playing field”.

Asked why the Bill had ignored the concerns of the Ms Dixon, as well as certain other recommendations by the Oireachtas committee, Mr Flanagan said this would be a matter of debate in the Oireachtas starting in the coming weeks.

“I believe it’s important in the context of public and State involvement that we lead by example here and that the State, all the public bodies and agencies attached thereto, would be fully compliant,” he said.