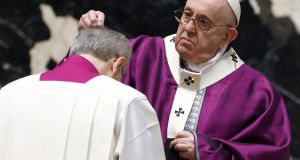 Pope Francis sprinkles ashes on a cardinal’s head as he leads Catholics into Lent with the Ash Wednesday mass at St Peter’s Basilica at the Vatican. Photograph:

Pope Francis led the world’s 1.3 billion Roman Catholics into Lent on Ash Wednesday, as they scaled back a centuries-old ritual to help stem the spread of the coronavirus.

Francis, who normally marks the start of the penitential season with an outdoor procession between two ancient churches in Rome, instead said a Mass for about 120 people in St Peter’s Basilica.

During Lent, which ends with Easter, Christians are called on to fast, practice more good deeds, give alms, be close to the needy and suffering, and give up something, such as sweets.

Last month, the Vatican issued guidelines for Ash Wednesday in the Covid-19 era. They said priests should sprinkle ashes on the head rather than rub them on the forehead, and masks and recite the traditional “Remember that you are dust and to dust you will return” once before everyone rather than to each congregant.

The pope himself, however, did not totally apply the new rules, generously dumping ashes on the crown of the heads of some cardinals and patting them down.

Sprinkling of ashes has been customary in parts of Europe and Latin America while rubbing on the forehead is predominant in the United States.

In his sermon, the pope said Lent should be a chance to leave behind “the false security of money and conveniences.. chasing things that are here today and gone tomorrow,” and return to God.

When the tweaked guidelines were announced, some Catholics complained, saying keeping ashes on the forehead all day was a way of showing others you were Christian.

Others made light of the changes. “I have enough grey hair. This (sprinkling of ashes) is not helpful,” one woman tweeted. – Reuters