Transcripts of all mother and baby home testimonies available 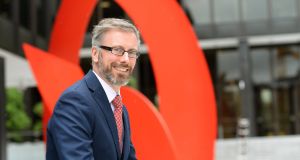 Minister for Children Roderic O’Gorman says he can understand the ‘very real anger’ of the survivors unhappy about the destruction of the recordings. Photograph: Dara Mac Dónaill

Transcripts of all testimonies given in confidence to the Mother and Baby Homes Commission will be handed over to the Minister for Children next week and have already been read by all the witnesses who have requested to see them.

The Commission of Investigation into Mother and Baby Homes, which first believed recordings of the testimonies had been destroyed, has now said that “disaster recovery” tapes have been located.

The testimony of hundreds of people to the commission’s confidential committee was recorded, but witnesses were told the tapes would be used only as an aide memoire and destroyed afterwards.

When a witness before the committee completed his or her evidence, this was written up by the researcher/note taker who then checked the completed transcript against the audio recording for accuracy.

Some witnesses have since said they have no recollection of being asked for permission to destroy the tapes, with the majority of complaints coming from advocacy groups, and not those who spent time in mother and baby homes.

The commission contacted all 549 people who appeared before the confidential committee to see whether they wished to have names and other identifying details redacted from the transcripts before these are handed over next week.

A number of those contacted asked to see their transcripts, which were provided to them. Transcripts will continue to be available to witnesses after they are handed over to the Minister next week.

There have been no complaints from the 195 people who appeared before the commission’s other committee, its investigation committee, including 64 witnesses who had been in the homes.

Responding to news that disaster recovery tapes exist, Minister for Children Roderic O’Gorman said it was just a possibility that they contained the recordings of the 549 survivors, but he hoped they did.

His department last night said it “may take a number of weeks to confirm if all 549 recordings are available and intact”, adding that 75 people have asked the commission to redact their identity.

Saying he could understand the “very real anger” of the survivors unhappy about the destruction of the recordings, Mr O’Gorman said he had been working to find a solution and to make sure their voices were heard.

Speaking in the Seanad, Mr O’Gorman said: “The commission informed me that they had become aware of backup tapes held off-site, which may – I have to stress the word may – contain the audio files of the personal accounts given to the confidential committee.

“This follows my earlier request to them to exhaust all possibilities to retrieve data from the interviews if that data still existed,” he said.

The Minister said he hoped the recordings do exist but that it was not until the tapes are retrieved, reconnected to and IT system, and transferred to his department that he could say this as a fact.

“I don’t want to raise expectations about these tapes. I think we’re all aware that sometimes technology can let us down. These backup tapes are disaster recovery tapes and that’s their function.”

Meanwhile, Mr O’Gorman said he was consulting the Attorney General about the legal issues involved in extending the commission’s term, including whether they can change its terms of reference when the report has already been published.