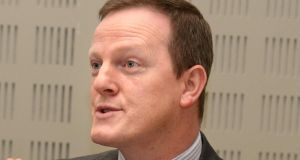 Alan Farrell: said he hoped the decision to expel the former volunteers would allow Scouting Ireland to ‘draw a line in the sand’. Photograph: Dara Mac Dónaill

The board of the youth organisation recently expelled chief scout Christy McCann, chief commissioner David Shalloo, and former board member Ollie Kehoe from its membership, citing evidence of misconduct.

A fourth senior officer, chief commissioner Thérèse Bermingham, was suspended for two years from holding any position outside her local scout group.

A subsequent independent investigation made multiple findings that the four volunteers had acted inappropriately in the case.

On Tuesday Mr Farrell said he hoped the decision to expel the former volunteers would allow Scouting Ireland to “draw a line in the sand”. He was chairman of the Oireachtas committee on children which examined standards in the organisation over several hearings. The public controversy had served as a “watershed moment” for the voluntary organisation, he said.

The organisation had been concerned over potential legal challenges from any of the four volunteers over the decision, according to several sources. Extensive legal advice was taken at various stages of the near three-year process, which was in part so lengthy in order to afford the four fair procedures.

The board took the decision on January 10th, giving the volunteers three weeks to respond before it was finalised last week. Members were informed on Monday of the expulsion of Mr McCann, Mr Shalloo, and Mr Kehoe, and the sanctions on Ms Bermingham.

Mr Elliott, who had clashed with the four volunteers on several occasions, said he did not wish to comment on the board’s decision. He said he was confident Scouting Ireland had made significant improvements to its safeguarding standards in recent years.

He said there were “good resources in place” in its safeguarding department, under an effective board structure, and the organisation had made “very positive improvements” since his initial report in early 2018.

It is understood board member, Richard Lucas, resigned over disagreements with the process in recent weeks, ahead of the board’s decision.

Some grassroots members disagreed strongly with the decision, sharply criticising the board in a private social media group of volunteers.

Patricia Blake, a volunteer, described the expulsions as “despicable”. In an email to the board she told the directors they should be “totally ashamed”.

Labour Party TD Seán Sherlock criticised what he said was a lack of transparency around the expulsion decision. He said given the organisation received significant public funding its process should be “fully and comprehensively explained”.