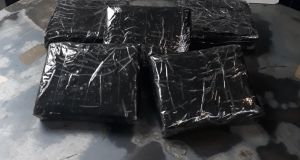 Revenue officers at Portlaoise Mail Centre, Co Laois, seized cannabis with an estimated street value of €120,000, which was concealed in a wooden ornament that had been declared as a “wedding present”, on Monday.

The officers seized 6kg of herbal cannabis after it was discovered concealed in the carved wooden ornament, which originated from Thailand and was destined for an address in Dublin. Revenue said investigations are ongoing with a view to prosecution.

Separately, Revenue officers at Dublin Port seized 1.15kg of herbal cannabis, with an estimated street value of €23,000, on Tuesday. The detection was made with the assistance of Revenue detector dog Robbie, when officers stopped a foot passenger who was travelling from Holyhead.

A male was arrested and investigations are ongoing with a view to prosecution.

In another incident on Tuesday, Revenue officers at Dublin Port seized a nine-month-old pit bull terrier cross breed puppy when they stopped and questioned a man in his 50s who was travelling to the UK.

The man did not have a pet passport for the puppy, as required under the Animal Health and Welfare Act, 2013.

The puppy was transferred into the care of the DSPCA, where he is receiving veterinary attention, and a follow-up investigation is now under way.

Revenue said it “collaborates closely” with the DSPCA and other bodies to combat illegal puppy trading.

The seizures are part of Revenue’s ongoing operations targeting smuggling. If you have any information about smuggling please contact Revenue’s confidential freephone number on 1800-295295.