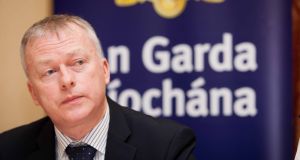 Det Supt Seamus Boland was one of two gardaí honoured at the ceremony in Spain. Photograph: Gareth Chaney/Collins

Almost 100 firearms, including 11 machine guns, and drugs and cash to the value of over €160 million have been seized by the Garda National Drugs and Organised Crime Bureau (DOCB) since it was established four years ago the Garda has said.

Details of the haul was unveiled as the bureau and other parts of the Garda force where honoured by Spanish police force, the Guardia Civil.

The head of the bureau Det Supt Seamus Boland and a Spanish-based Garda liaison officer, who are never identified, from the Security and Intelligence sector of the force were both awarded with the Merit Order Cross of the Guardia Civil.

The awards were in recognition of the cooperation between the Garda and the Spanish police on the investigation of organised crime in Spain with an Irish dimension.

Assistant Commissioner John O’Driscoll, who is in charge of Special Crime Operations across the Garda, was a guest of honour at the ceremony held in Guardia Civil’s headquarters in Mallorca.

The highest profile success arising from the cooperation between the Irish and Spanish forces in recent years was the conviction of Dubliner James Quinn last year in Spain for the murder in that country of Irish criminal Gary Hutch.

The 35-year-old was shot dead in southern Spain in September 2015 by the Kinahan organised crime cartel.

On the occasion of the awards being presented, on Wednesday, the Garda said DOCB had seized 97 firearms since it was established in March, 2015, during a reorganisation of Garda specialist units.

As well as the 11 machine guns, the firearms also included seven assault rifles, eight shotguns, five rifles and 11 stun guns. More than 3,000 rounds of ammunition had also been seized.

Investigations undertaken by Security and Intelligence under Assistant Commissioner O’Driscoll through DOCB have resulted in the seizure of almost €8.5 million in cash and drugs with an estimated street value of €155 million.

The murder of Gary Hutch, in a gated residential estate in Miraflores near Fuengirola where he lived, began the Kinahan-Hutch feud. To date 18 people have lost their lives in feud attacks.

That feud resulted in a ramping up of cooperation between the Garda and Spanish police as the leaders of the Kinahan cartel were based in southern Spain at the time.

As a result, and because they were concerned for their safety in Spain, the leaders of the cartel brothers Daniel and Christopher Jnr Kinahan, have fled to Dubai.

Since then the Garda’s specialist units, spearheaded by DOCB, have built relationships with the authorities in Dubai.