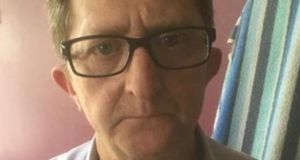 Detectives from PSNI’s Serious Crime Branch have launched a murder investigation into the disappearance of Pat (William) McCormick.

Detectives in Northern Ireland investigating the murder of a father of four who disappeared almost a week ago have released CCTV footage of his last known movements.

Pat (William) McCormick (55) from Co Down was last seen in Comber on Thursday May 30th. Detectives from the PSNI’s serious crime branch have not recovered a body but believe he has been murdered.

Mr McCormick is described as being 5ft 3ins in height, of medium build, with short dark brown hair.

PSNI detective chief inspector Pete Montgomery on Wednesday appealed for anyone with information to come forward.

“I know that Pat left his parent’s house in Ballynahinch on Thursday May 30th just after 9pm,” he said. “In the CCTV, Pat can be seen driving his car in Castle Street, Comber, at around 10.30pm. It’s a Black Citroen C4, registration BSZ 7103.

“I know that Pat then parked his car on High Street, opposite McBride’s pub where it remained until it was recovered by police.

“In the footage, Pat can be seen walking down Castle Street at around 10.45pm, where he goes under an archway that leads to some flats. This is the last sighting that I have.”

Mr Montgomery also appealed to members of the public to report any sightings of discarded clothing. “On the night of Pat’s disappearance, he was wearing a beige jacket, blue jeans and brown brogue shoes,” he said.

“I’m hoping that the release of this footage will jog people’s memories. If you were in Comber on High Street or Castle Street after 10pm on Thursday, did you see Pat driving his car? Did you see him speaking to anyone or going anywhere with anyone?

“I am obviously very keen to recover Pat’s body for his family. I would also appeal to the public that if you are out walking in the area and see any discarded clothing, particularly the beige jacket, blue jeans or brown brogues, please contact detectives.

“Pat’s phone hasn’t been used from May 30th and it remains unaccounted for. It’s an iPhone SE so if you’re out and about and see this phone lying somewhere, please let me know. It could be broken, smashed or in pieces.

“I have met with Pat’s wife and parents and they are devastated. His mother and father are in their eighties and they deserve to get his body back.”

Mr Montgomery said the PSNI would also like to hear from anyone who captured any dash cam footage in the Comber area on Thursday May 30th from around 8pm until midnight.