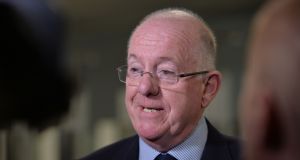 Minister for Justice Charlie Flanagan is on a visit to Coolock on Tuesday. File photograph: Alan Betson

People involved in the recent spate of gun violence in north Dublin were “losers” and the “bling” associated with their drug dealing would not last, Minister for Justice Charlie Flanagan has said.

He was speaking in the aftermath of three fatal shootings in the last fortnight of men who lived in north Dublin, all linked to the same network of armed drug dealers growing in strength in the area.

Dublin’s Archbishop Diarmuid Martin has also hit out at gangs, saying their violence had reached a new level of depravity, adding displays of criminal wealth would not be tolerated at Catholic funerals.

Mr Flanagan, on a visit to Coolock Garda Station and the wider Coolock area on Tuesday morning, said he was speaking with Garda management “about their plan for the area”.

“My message to young people in this area is that there is no future in organised crime or drugs or the associated bling that that brings. These are losers.”

He believed the current challenge posed by feuding criminals could be met by the Garda with the support of local people.

While local community projects were “working well”, Mr Flanagan accepted there was “room for improvement” and was due to meet local community leaders in Coolock later on Tuesday.

However, it was an overwhelmingly law-abiding area where people worked with the Garda so those who did not respect law and order would be “taken out of society”.

He was accompanied by Minister for Communications, Climate Action and Environment Richard Bruton and Minister of State for Disability Issues Finian McGrath, who are both TDs for the local area.

Cllr John Lyons (Ind), who represents the Coolock area, described as “shameful” the presence of three ministers in the area though they had unveiled no new package of resources for the area.

“If the recent murders in Darndale and Kilmore had occurred in Dalkey or Killiney we would have seen a much swifter and more serious response from the Government,” he said.

He was murdered outside the family home of Sean Little (22) who was shot dead one week earlier on a back road near Walshestown off the M1 in north Co Dublin.

A day after Mr Little was shot, his close friend Jordan Davis (22) was shot dead while pushing his four-month-old son in a pram close to his home in Darndale, north Dublin.

The three men all knew each other through drug dealing and were all associates of Zach Parker, a 23-year-old Dubliner shot dead outside a gym in Swords, north Dublin, in January.

All four men were linked to a drugs gang now growing in dominance in north Dublin. The gang’s leadership is based in the Finglas area.

Meanwhile, gardaí in Dublin investigating the latest shooting in Dublin, which was not fatal, have appealed for witnesses to come forward.

On Saturday, June 1st, a man was shot at about 5.20pm on Blakestown Way, Blanchardstown, west Dublin. He made his way into the nearly Lidl shop looking for assistance.

They have appealed for anyone in the area of Blakestown Way or the Lidl story or its car park around the time of the shooting or in the hour leading to it to contact gardaí in Blanchardstown.