Enforcing a ban on showy gangland funerals will present difficulties 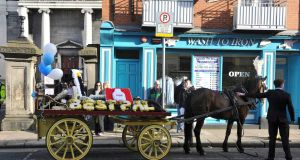 Floral tributes outside the church of St Nicholas of Myra after the funeral of David Byrne in Dublin, in February, 2016

Anyone who stood outside St Nicholas of Myra church on Francis Street in Dublin’s south inner city on the day of David Byrne’s funeral three years ago would have been in no doubt about what they were witnessing.

The gang the 34-year-old Crumlin man was part of was the most powerful in Dublin’s underworld. Everything about his funeral was designed to project that image – of a mafia-style organisation that had risen above common or garden gangland.

Horse-drawn carriages and elaborate wreathes have long been the preserve of organised crime in Dublin and Limerick when it gathers to bury its dead – usually murdered – loved ones.

But Byrne’s gang-leader brother Liam Byrne, in his own mind, is above that. And so a fleet of 11 Mercedes limousines was ordered.

Byrne’s remains were brought into the church in a US-style blue casket. Mourners were led by a lone piper and a group of about 30 men wearing identical suits was to the fore.

One characteristic of organised crime is that few, if any, of those who rise to the top socially climb. They remain living in the mainly working-class communities where they grew up.

“If they moved to more affluent places and they were driving around in an expensive car, for example, they wouldn’t stand out,” the head of Cab, Det Chief Supt Pat Clavin told The Irish Times of some gangland criminals in a recent interview.

“But if you drive around a more working-class area in a Range Rover Vogue worth €150,000, everybody notices, everybody knows who you are and what you have. And that is very, very important to most of these guys.”

It is perhaps no surprise then that, if their lives are centred on flaunting their wealth in that way, funerals would become another opportunity in that regard.

Aside from court cases, funerals are the only event at which gangland criminals know they will be photographed and recorded by journalists.

And so the veneer must be maintained, even maximised; the carefully crafted image of wealth and power must be what is presented to the community.

A new feature of some gangland funerals in Ireland has been the appearance of groups of men wearing matching pristine clothing.

This appears to have developed to give the impression that behind the dead man is a large, rich and powerful group. It is a chilling message to send to the community and gangland rivals that the deceased’s murder has not undermined the unity of the group he had been part of.

While Archbishop Diarmuid Martin’s statement that such displays would no longer be facilitated reflects a harder line by the Catholic Church in Dublin, policing a ban on “gangland funerals” will be very difficult.

It would be left to individual priests, one assumes, to differentiate between shows of wealth and shows of gangland wealth. This may prove impossible, especially when murdered gang members have no previous convictions for organised crime.

It is hard to see how priests can assess what a funeral will look like before it takes place and whether or not a gangland display is in the offing.

Furthermore, gardaí may not thank the Church for its mooted clampdown.

Big gangland funerals often prove fertile ground for gathering intelligence. The roles played by some men, or even their very presence, at a funeral often proves of great significance to gardaí trying to stay on top of the ever-changing landscape and allegiances in Dublin’s underworld.

1 Ireland’s coronavirus restrictions may lift more quickly if case numbers keep falling
2 Pricewatch: Left on the shelf - what we are no longer buying
3 Tax on Covid-19 payment could cause 'terrible shock' late in year
4 Maureen Dowd: Trump has been wearing a mask for years
5 ‘What planet are they on?’ — UK press attacks Johnson and Cummings
Real news has value SUBSCRIBE