Laws on rape and other sexual offences to be reviewed 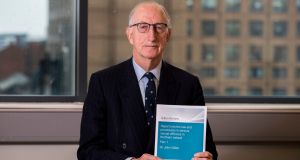 Sir John Gillen recommended the continuance of the practice in Northern Ireland to identify those who are accused of rape, once they have been charged. Photograph: Liam McBurney/PA

A report on the treatment of rape and other sexual offences that will address similar topics to that of the Gillen Review in Northern Ireland is to be produced by the Law Reform Commission.

The former Lord Justice of Appeal, the Right Honourable Sir John Gillen, produced a lengthy report last month in which he recommended that the public be banned from rape trials in Northern Ireland.

His review was prompted by the widespread unease created by the Belfast rape trial where a number of named rugby players were found not guilty of the rape of a woman whose identity was not revealed.

The trial provoked an enormous amount of public interest, not least because of the identity of the rugby players who were before the court.

Sir John recommended the continuance of the practice in Northern Ireland to identify those who are accused of rape, once they have been charged. He said this aspect of his review generated more controversy and division of opinion than any other he considered.

In the Republic, people accused of rape are not identified unless they are convicted, and then only if doing so does not endanger the anonymity of the person they raped.

Sir John said that despite the physical and mental consequences suffered by accused persons and their close family members, he was in favour of maintaining the status quo for two reasons.

One “crucial advantage” of publishing the accused’s name, post charge, was that in some instances it provoked other victims to come forward. Such a development can be crucial in a crime where it is often the complainant’s word against that of the accused.

A second reason for maintaining the status quo, he said, was the extreme difficulty in justifying the anonymity of the accused in serious sexual offences, and not in other types of heinous crimes.

The Law Reform Commission has announced that, as part of its fifth programme of law reform, it is to review a range of matters including aspects of our sexual offences law.

The commission produces in depth reports on Irish law in a rolling series of programmes and also as a result of requests from the Office of the Attorney General. The reports are then used by government departments when devising or revising individual laws or areas of the law.

It will look at the definition of rape, the use of sexual history evidence, the anonymity of accused persons, whether rape trials should be heard other than in public, and the issue of separate legal representation for complainants.

Among the other areas of the law to be reviewed are perjury, Garda custody rules, compensating victims of crime, the capping of personal injuries claims, aspects of our divorce law, and aspects of the land and conveyancing law.

The topics will be reviewed over a period of three years during which public responses to changes proposed will be sought.

Among the laws to be reviewed are the Hotel Propietors Act 1963, which says hotels have a duty to charge for accommodation, food and drink “at the charges for the time being current at the hotel”.

The commission is to look at whether this provision reflects “the reality of hotel prices in the second decade of the 21st century, where the vast majority of hotel rooms are booked online, with algorithms and specific factors such as the occurance of a major sporting or other public event playing a prominent role in determining the price to be charged.”

The commission’s document setting out its programme of work also asks whether the law’s reach should be extended to guesthouses, hostels and “comparable online-era short-term letting arrangements”, which would appear to be a reference to Airbnb. The programme document is on the commission’s website.