Trevor Birney: Police had a choice – to go after us or the killers 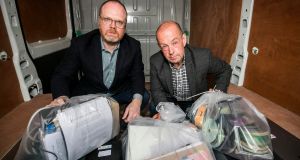 Two arrested documentary makers have retrieved a vast haul of journalistic and personal material unlawfully seized by police, and called for senior officers to be held to account.

Trevor Birney and Barry McCaffrey visited a police station in south Belfast to collect their possessions in a white van, hours after detectives dramatically dropped their investigation into them.

Representatives of the National Union of Journalists (NUJ) and Amnesty International held banners in support of the duo.

Police were forced by judges to return laptops, hard drives, mobile phones, notepads and millions of digital files seized from their homes and office.

The outcome of last week’s challenge in the civil courts, which ruled search warrants used by police unlawful, prompted officers to announce late on Monday that the criminal probe into the film-makers was being discontinued.

Mr Birney and Mr McCaffrey were arrested last August over the alleged theft of a police watchdog document that appeared in their film on a notorious loyalist massacre during the Northern Ireland Troubles.

The reporters, who insist the material on the Loughinisland killings came from an anonymous whistleblower, had been on bail ever since.

“Our names were dragged through the mud. Trevor’s children were forced to watch him being arrested and taken away, an eight-year-old girl.

“Was this necessary? Why did this have to happen?”

Both organisations confirmed on Monday that the reporters were no longer under investigation, although they said the wider probe would continue.

Mr McCaffrey said he had still not received an apology from the heads of either organisation for their treatment.

He criticised how the judge who granted the search warrant of their office and homes was directed by officers.

“This cannot be allowed to happen. Somebody has to be held to account. This is not right.”

Among the items returned on Tuesday were Mr Birney’s wife’s phone and his daughter’s pink phone.

He said: “The key thing that you can see is finally my daughter is getting her little lollypop USB stick back, which apparently has her GCSE homework coursework on.

“These were obviously critical to the investigation into myself and Barry and what we are meant to have done.

“It tells you everything you need to know about this investigation.”

He said those who directed, led and oversaw what the police were doing had questions to answer.

“This investigation really had no focus other than sending a chill factor to journalists and no matter who got caught up in that, whether it was my children or Barry’s family.”

Mr Birney said it was a “fishing expedition” which the Belfast High Court had “eviscerated” in a damning indictment of the leadership of the PSNI.

Three senior judges quashed warrants used by police to seize a wide range of journalistic material from early morning raids on the men’s homes and their film company, Fine Point.

Their 2017 documentary No Stone Unturned broke new ground by naming suspects it said were involved in the Ulster Volunteer Force (UVF) killings of six Catholic men gathered in a village pub watching the Republic of Ireland play a World Cup football match on TV.

Trevor Birney told RTÉ radio’s Morning Ireland on Tuesday that the PSNI had other options, but took the option of last resort “and came after us”.

“The police had a choice – to go after us or the killers. They chose to use the resources to chase us.”

He called on the police to apologise to the Loughlinisland families “for putting them through this.”

John Finucane, solicitor for Barry McCaffrey, later told RTÉ’s Today with Sean O’Rourke show that the police need to examine the criminal investigation that led to the two journalists being arrested over confidential material they aired in the documentary.

He said the impact of the case on the journalists and their families had been enormous. They were respected, award-winning documentary makers who were arrested in front of the families and neighbours by heavily armed officers.

The were subsequently held for 14 hours and questioned while their solicitors made representations arguing that there was no justification for the arrests.

The ruling in the judicial review last week “couldn’t have been any clearer.”

He added that the judge had praised the journalists for their work, said there was no criminal offence and made repeated references to the NUJ code of conduct.

Mr Finucane pointed out that prior to the broadcast of the documentary the two journalists had contacted the police to inform them of the content of the programme. The suspects were also informed, yet no action was taken by them, he said.

The title of the documentary No Stone Unturned had been ironic he said as it was clear that “no stone was turned at all.”

What was worrying was that the police reaction had been to “go after” the journalists rather than the suspects, all of whom are still alive, he said.

“The failure to disclose all relevant information relating to loyalist atrocities and the arrest of investigative journalists who exposed the state’s role in the Loughinsland massacre are just the most recent examples that have cast serious doubt on the PSNI’s credibility and impartiality,” she said.