Murder victims’ loved ones: ‘We are sick of being patronised’ 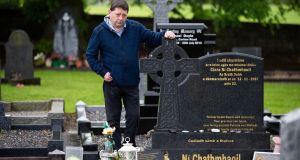 The letter arrived in November. It was from the parole board wanting to know if the family of Ciara Ní Chathmhaoil had anything to submit regarding her killer’s potential release.

Her parents, Micheál and Paidi, began to think about what to write – how to say it all in one “submission” on the life of their 22-year-old daughter and the trauma of her death in 2007.

Ciara was stabbed 28 times by her ex-boyfriend Gordon Molloy who had been hiding behind a door waiting for her to return home. Her final screamed words before the frenzy were to tell her four-year-old son Jamie to run away.

“We sit down every night and have a chat, we actually talk about work. It’s just to be normal,” Micheál Cunningham explains all these years later.

“But at the end of the day we [eventually] say, right what are we doing next to keep Molloy in prison?”

On Wednesday morning, they, alongside other families of murder victims, will meet outside Dáil Éireann to demand an overhaul of the system – the sentencing structures; the day-release scheme; the protracted parole system; and the place families occupy in the mind of the State.

Immediately following Molloy’s 2009 conviction, Mr Cunningham remembers being told he would be eligible for parole after seven years.

“We just kind of laughed it off. Five years later [Molloy had already spent two years in custody] we got an email from the IPS [Irish Prison Service] saying that Gordon Molloy is up for parole and please send in your submissions,” he says.

“The stress that caused our family was unreal . . . We just started from the start – ‘My name is Micheál Cunningham and my daughter is Ciara Ní Chathmhaoil’ and that’s how it starts.”

Much of the distress, he says, is in the mechanical nature of the process – there is no guidance, no indication of when a decision will be made or when they might expect to be told, and whatever they submit can be read by Molloy.

That detail is a bone of contention for other families too, says John Whelan who runs Save (Sentencing and Victim Equality), the group behind Wednesday’s demonstration.

The need for continuous engagement with the process – over a number of parole hearings – means the State “keeps grabbing you by the collar”, he says.

“You don’t get any time to try and move on, to take any steps forward.”

Just over a year after the death of Ciara Ní Chathmhaoil, Mr Whelan’s sister Sharon was murdered in her home by Brian Hennessy in the early hours of Christmas morning. Her two children Zarah (7) and Nadia (2) also died when he burnt the house down after the attack. Hennessy had his first, unsuccessful, parole hearing last year.

While some families support a “life means life” approach, Mr Whelan suggests minimum tariffs of between 25 years and life, depending on the case. Whatever is considered, the group feel something needs to be done.

In the Parole Board’s 2017 annual report, chairman John Costello noted how letters from victims and families ahead of hearings often “reveal enormous pain and suffering”.

“Many family members are still experiencing severe trauma and mental health problems after the death of their loved one. These letters are seriously considered by the board members,” he said.

In a recent RTÉ radio interview, Brigid McLoughlin – whose sister Siobhán Kearney was murdered in her home by her husband Brian in 2006 – said the parole process “triggered every single memory” of the death and subsequent court case.

It is this clash of human suffering and bureaucracy that drives Save’s members. Ahead of Gordon Molloy’s hearing this month, Micheál Cunningham says there was no guidance on how to make their second submission, just a blank piece of paper.

They just start at the beginning, he says, “and try to convince people to keep him in there . . . We shouldn’t need to convince anyone.”

Parole: how the process works

In 2017, 14 life-sentence prisoners received full parole out of 21 recommended for release on a phased basis of between 12 and 18 months .

Of those, according to the Parole Board’s annual report, the average amount of time spent behind bars was 18 years. The board, made up of professionals primarily from the criminal justice field, takes into account the nature and gravity of the offence and any potential threat posed to society. Work in custody, including therapeutic or rehabilitative programmes, is also considered. Its decisions must be submitted for approval to the Minister for Justice. Life sentence prisoners can be released “on licence” which means they can be returned to prison if any conditions are breached.