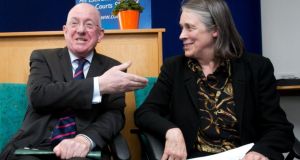 Minister for Justice Charlie Flanagan and Chief Justice Susan Denham at the annual report of the Courts Service for 2016 in Smithfield. Photograph: Gareth Chaney Collins

The Cabinet is expected to choose the new chief justice from a shortlist of three candidates at its final meeting before the summer recess on Wednesday.

Chief Justice Susan Denham is due to step down after six years as head of the judiciary, and 25 years on the Supreme Court, next month, but the Government is keen to nominate her successor before the recess so as to ensure a smooth transition.

Some 15 applications were received from sitting judges by the deadline of last Thursday, each with the required 500-word outline of the applicant’s experience and qualifications. These were considered by an ad-hoc panel comprising Jane Williams, chairwoman of the Top Level Appointments Committee; Mr Justice Sean Ryan, president of the Court of Appeal, and Attorney General Séamus Woulfe. It is understood the committee sent three names to the Department of An Taoiseach, which is coordinating the process, on Friday evening.

All but one of the seven ordinary members of the Supreme Court applied for the position, according to informed sources, in addition to at least four members of the Court of Appeal and four High Court judges.

The practice for decades has been for Cabinet to be presented with the name of a single preferred candidate for a senior judicial position after private discussions involving the taoiseach, attorney general, minister for justice and – in coalition governments – the tánaiste. Given the recent controversy over the nomination of then attorney general Máire Whelan as a judge of the Court of Appeal, however, Taoiseach Leo Varadkar may feel obliged to share the shortlist with Cabinet and open the discussion.

The Cabinet may ignore any recommendations from the ad-hoc committee, but that is thought to be unlikely given tensions over the Whelan nomination.

The three frontrunners for the position are current Supreme Court judges Donal O’Donnell and Frank Clarke and High Court president Peter Kelly, according to sources close to the process. All three are highly regarded, independent-minded, experienced and have roots outside the Dublin legal establishment. They’re also deemed to have the mix of intellectual and organisational abilities necessary for the role.

A number of other candidates have a chance of being selected, however. Ms Justice Elizabeth Dunne of the Supreme Court and Ms Justice Mary Finlay Geoghegan of the Court of Appeal are in contention.

All other Supreme Court judges – Mr Justice Liam McKechnie, Mr Justice John Mac Menamin, Mr Justice Peter Charleton and Ms Justice Iseult O’Malley – are in the running. If the Government wishes to appoint from outside the current Supreme Court, however, it could also look to Court of Appeal members such as Mr Justice Michael Peart (who would become the first ex-solicitor to become Chief Justice), Mr Justice George Birmingham, Ms Justice Mary Irvine or Mr Justice Gerard Hogan.

Ms Justice Irvine and Mr Justice Birmingham are frontrunners to replace the president of that court, Mr Justice Ryan, when he retires next year.

Mr Justice O’Donnell, who turns 60 this year, is the youngest of the frontrunners and the only one who would be in a position to serve a full seven-year term as chief justice. Mr Justice Clarke and Mr Justice Kelly are due to retire in four and three years, respectively.

Minister for Justice said there was “every likelihood” Cabinet would nominate the next chief justice at its final meeting before the summer recess on Wednesday.

Speaking at the launch of the Courts Service annual report, Mr Flanagan added: “In that regard can I pay a particular tribute to the outgoing and retiring chief justice Susan Denham, who has been an inspiration in terms of her pioneering work as a judge as a member of the legal profession for many decades.”

When Ms Justice Denham steps down next month, it will mark the end of an era in the judiciary. Her 25 years on the court, a period that spans some of the biggest cases and controversies of the modern era, has made her the third longest-serving Supreme Court judge after James Murnaghan (1925-53) and Brian Walsh (1961-90).

Those who lose out in the contest to succeed her can console themselves with the knowledge that some of the best judges, among them Séamus Henchy and Brian Walsh, never became chief justice.