Chief Justice candidate has series of important judgments to his name 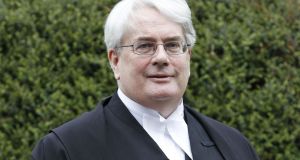 Mr Justice Frank Clarke: first member of his family to go to university

After almost 20 years as a senior counsel, Frank Clarke was head-hunted for the High Court in 2004 by the Fianna Fáil/PD coalition.

With a degree in maths and economics, and a stellar record as an all-rounder at the Bar, he was thrust into the heat of Commercial Court as the fallout from the economic collapse of the late 2000s began to dominate the court lists. His prodigious, high-quality output there, and on the Supreme Court since 2012, means he has left a voluminous trail of highly influential judgments that have become points of reference across a range of areas.

Born in Drimnagh, Dublin, in 1951 – he turns 66 this year, so could serve four years as chief justice before his retirement – Clarke was the first member of his family to go to university, and in speeches he has spoken of the importance of encouraging young people from different backgrounds to pursue legal careers.

At UCD in the early 1970s, he moved in a circle that included many future members of the judiciary and law library, including John MacMenamin, Kevin Cross and Michael McDowell. He was also close to Adrian Hardiman, who beat him for the auditorship of the Literary and Historical Society.

In the summer after leaving Drimnagh Castle CBS, Clarke joined Fine Gael and began to canvass for Jim Mitchell in Dublin South West. Later he wrote speeches for Garret FitzGerald and was election agent for the former Fine Gael TD George Birmingham, who is now a judge on the Court of Appeal. He also ran unsuccessfully for the Seanad in the 1980s.

Clarke is seen one of the most influential figures on the Supreme Court. He is socially liberal and while he is usually in the majority in split decisions, he gave the sole dissenting judgment on a seven-judge court in a landmark surrogacy case in 2014.

Asked whether the genetic mother of twins born to a surrogate could be registered as their mother, Clarke concluded that, in the absence of a definition of the term, “mother” applied equally to a birth mother and a genetic mother.

Clarke has also laid down important markers. In the recent Persona case, he noted there was a real problem with access to justice and in effect suggested that if nothing was done about it that the courts themselves would be forced to act.

Clarke is married to the academic Jacqueline Hayden. He is a regular at race meetings and a Leinster rugby season-ticket holder.