‘They dragged me from the hall to the sitting room by my hair; he tied my legs’ 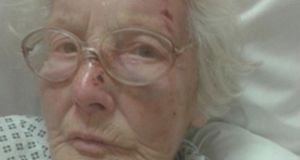 Eva Sutton had to leave her home of 54 years and has never returned. Photograph courtesy of RTÉ News

An elderly widow who suffered a vicious beating from two men, the second of whom was jailed on Tuesday for eight years, has told of how she could not go back to the home where she had lived for more than 50 years after the attack.

A 25-year-old career criminal who, in the words of the judge “tortured a decent, wonderful kind” 89 year old widow during a “vicious, violent, savage, and brutal” attack at her home, was sentenced on Tuesday.

Michael Cash, from Ashlawn Park in Ballybrack, Dublin, was one of two men who beat and kicked Eva Sutton in the head and body during the robbery at her home in Bray, Co Wicklow in September 2015.

His accomplice, Jamie O’Brien, has already been imprisoned for the crime. He was sentenced last April for ten years with two years suspended.

“I don’t have my home any longer,” Ms Sutton told RTÉ’s News at One.

“I loved my home. I had everything I wanted there. I was still able to do everything for myself. I could go out to the shops and meet my friends.

“I miss Bray. I miss the people of Bray.”

Ms Sutton told of how she had been very independent and while she knew the time was coming when she could no longer live alone, she had not been ready to give up.

She said the thieves must have awoken her before the attack. When she walked into the room they demanded money and jewellery. She told them she had none as she was a pensioner. They had already found her “good jewellery” which she had worn earlier that day and had left “in a little jug covered with tissue paper”.

“I asked them to please leave me alone. They didn’t. I had seven broken ribs, a punctured lung, a broken nose. My legs were all cut. I don’t know what cut them, but my legs were all bleeding.”

Her night dress was covered in blood, she recalled.

“They dragged me from the hall to the sitting room by my hair. I remember looking at the clock and it was 5 o’clock or 6 o’clock. He tied my legs. I knew one wasn’t very well tied up but I said nothing.

“I don’t know if they left or if I was unconscious. When I came to I loosened my legs and got up. The hall door was already open.

“I looked up the road, there was a man standing at the bus stop. I shouted help, but he ignored me,” she recalled.

Ms Sutton, who now lives in a nursing home, said she has not gone back to her home. “When I passed it I couldn’t bring myself to look at it. I reared my family there. I lived there from 1959.”