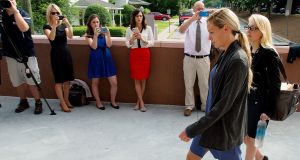 Jury impanelling in the Jason Corbett trial was nearing completion on Friday ahead of proceedings proper starting in Davidson County Courthouse in Lexington, North Carolina.

The widow of Mr Corbett, Molly Martens Corbett, and his father-in-law, Thomas Martens, are charged with second-degree murder in connection with an incident in the early hours of August 2nd, 2015, when he was found beaten to death inside his Wallburg home.

Ms Martens and her father have both pleaded not guilty, claiming self-defence.

Entering Friday’s proceedings, 10 jurors had been seated. Potential jurors were questioned by the prosecution and the defence, with one member of the jury meeting the approval of all attorneys in the morning.

Another potential juror was removed from consideration after she explained that a violent crime against her sibling might evoke sympathy for Mr Martens as a parent who allegedly saw his daughter attacked.

The juror was excused by the prosecution through the use of a peremptory challenge, which allows counsel to remove jurors without stating a reason.

A second potential juror was allowed to step down by the judge due to the financial hardship it would cause her. The dismissals followed a pattern that has lasted throughout the week.

Some 143 potential jurors were assigned to the case at the start of the week before the final selection process. This involved completing a questionnaire, which included seeking their knowledge of potential witnesses.

The trial proper is due to begin on Monday.