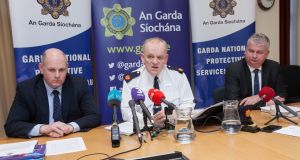 One in every 10 images of online child abuse material detected in Ireland depicts children under the age of three.

Of the remainder (61 per cent) are mostly of children aged between four and 12 with nearly half of all images showing the active rape of a child, according to 2016 data from Hotline.ie, a service operated by Irish internet service providers that works with gardaí to tackle online child abuse.

“People think of the victims as being teenagers and upwards. There is no age too young for these images. Europol has dealt with images with an umbilical cord,” child protection advocate and former senator Jillian van Turnhout told The Irish Times.

Viewers and distributors of child abuse material are believed by experts to be using increasingly sophisticated methods to avoid detection, meaning those caught by the authorities represent the tip of the iceberg, she said.

In 2016, Hotline.ie received 7,141 tip-offs about suspected child abuse imagery, most from people who stumbled across them while browsing online.

A follow-up assessment found 385 of the reports related to “child pornography” under the law (child pornography is the term used in the legislation but child protection advocates argue the term normalises abuse). Each report typically involved tens or hundreds of images.

A further 6,084 of the reports were found not to involve illegal material. Assessors determined they were either adult pornographic images or images of children which, while possibly containing nudity, were not produced for a sexual purpose (for example, a child in a swimsuit at the beach).

It is impossible to know exactly how many people in Ireland are accessing child abuse material but studies from other countries provide a rough guide.

A highly regarded German study, the MiKADO Project, conducted an online survey of almost 9,000 males, 2.4 per cent of whom admitted to accessing child abuse images. Applying the same percentage to the Irish population would mean more than 56,000 active male users. 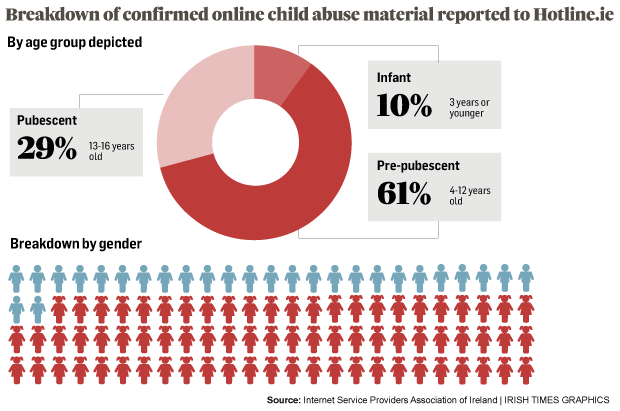 Hotline.ie separated the child abuse images it found into five categories of severity with category one comprising of “explicit sexual posing of a child” and category five depicting “sadistic sexual subjugation or bestiality involving a child”.

Forty six per cent of the material fell into the second most serious category (penetrative sexual activity between child and adult). Material depicting young girls made up 73 per cent of the images, with boys present in 27 per cent.

With two exceptions, the images were hosted outside Ireland. The US was the hosting country in 247 cases while the Netherlands was the host in 27.

The number of reports was roughly half of the 2007 figure, which saw the highest ever number of images confirmed as child abuse material by Hotline.ie.

Experts worry this drop could reflect the increased ability of paedophiles to mask their online activity.

In 2016, the Internet Watch Foundation, a UK organisation which monitors online child abuse, detected a 112 per cent rise in the use of “masking” techniques to hide images on the internet while leaving “clues” to other paedophiles on how to find them.

Techniques to avoid detection include the use of a virtual private network (vpn) combined with a Tor browser, which hides a user’s internet activity from all but the most sophisticated investigative techniques.

One of the more recent innovations by distributors of child abuse material is the dividing up of video files into fragments which are then hosted at many different IP addresses. Those wishing to view the material must track down all the parts using instructions from other paedophiles, making them extremely hard to track.

Other distributors use a technique called Fast Flux which changes the web address of a child pornography hosting platform every few minutes or hours, meaning only those aware of the latest address can access it.

According to Ms van Turnhout, the most prevalent and dangerous forms of child pornography distribution are exchange forums where images and videos are traded among users.

“In order to gain access to these images you have to provide images. And they have to be new images. They can’t go to another site and take them from there. So that leads to them taking pictures of their children. They get drawn into it.”

Ms Van Turnhout said it is vital to recognise that the average viewer of child abuse material is “a middle-aged married man with children”.

“They could be browsing online looking for normal images. Then they stumble across it. They’re horrified. They walk away. And in a week a certain percentage go back. They start looking at it more and more.”

Unlike the UK, internet service providers (ISPs) in Ireland do not provide a filtering system for child abuse material, although many sites where users can download pirated movies and music are blocked

Ms van Turnhout believes ISPs should be obliged to block sites known for hosting child abuse material. She said the UK authorities already have a comprehensive list of such sites which they would be happy to share with Irish ISPs.

“It’s not a thing that’s going to go away. We’re not going to be able to stop it all. But we could minimise it.”