Man asks Minister to allow his three children, two of whom are in an orphanage in Bangladesh, to join him in Ireland 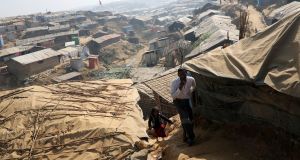 The Rohingya man at the centre of the “right to work” case has asked the Minister for Justice to allow his three children, two of whom are in an orphanage in Bangladesh, to join him here.

An entry visa granted to his wife is due to expire on March 5th and the couple are anxious that she and the children can travel here before that date.

The man, aged in his thirties from Myanmar, sought refugee status a day after arriving here in July 2008 but spent eight years in direct provision before getting refugee status in late 2016.

His long-running action over not being permitted to work in those eight years lead last Friday to the Supreme Court striking down as unconstitutional the absolute ban on asylum seekers working.

He says he had two children by his first wife before he came here, she died in 2010 after a serious illness and both children, now teenagers, are in an orphanage in Bangladesh.

After the Minister informed the man last December his wife would be issued a visa under the ordinary administrative process, he withdrew the judicial review proceedings

After he got refugee status, he married a woman in Bangladesh in January 2017 and they lived at her home until he returned alone to Ireland in February. She gave birth to their child in October last.

The man applied in March 2017 under the International Protection Act 2015 for permission to have his wife and his two children by his first wife, who are all outside the State, and his brother, who is an asylum seeker here, join him in Ireland under the family reunification scheme. His wife also applied for an entry visa under the ordinary administrative scheme.

On May 16th 2017, two weeks before the man won his Supreme Court case, the Minister refused to process the applications in relation to his wife and brother but agreed to process those concerning his children. A decision on the children’s application is awaited.

On May 30th, the Supreme Court said it had found the absolute ban on asylum seekers working was unconstitutional “in principle” but it deferred making a formal declaration striking down the relevant law – Section 14.3.b of the 2015 Act – to allow the Government time to address the situation.

The refusal to process the applications for the man’s wife and brother was because they were not deemed to be “family members” under Section 56(9) of the 2015 Act: the wife because they were not married when he applied for asylum in 2008; and the brother because brothers are excluded in general.

In July 2017 the man and his wife challenged the refusal to process his wife’s application in judicial review proceedings against the Minister for Justice and the State, with the Irish Human Rights and Equality Commission a notice party.

Section 56 of the 2015 Act introduced a more restrictive test which requires that the marriage exists when the refugee applies for protection, rather than reunification.

The man claimed Section 56 meant he, a recognised refugee, was being treated less favourably for the purpose of family reunification depending upon whether he was married before or after he applied for refugee status. It was claimed that amounted to unlawful discrimination against him and his wife on the basis of their status without objective justification.

After the Minister informed the man last December his wife would be issued a visa under the ordinary administrative process, he withdrew the judicial review proceedings.

The entry visa for his wife expires on March 5th and the man is anxious that decisions on a visa for their baby, and on the reunification application for his two older children, are taken before then.

Boat refused to get out of shipping lane and delayed appraoch of cruiseliner, court told

Nearly 2,000 more students register to vote, says USI 20:38
Councillors back plan for Magdalene laundry to be third-level college 20:23
Over 65s are expected to ‘crawl into corner and die’, says election hopeful Valerie Cox 20:09
Yacht captain guilty of drunk sailing had ‘God given right’ to be on Liffey 20:06
Labour attacks ‘dysfunctional’ Fine Gael coalition at party launch 19:26