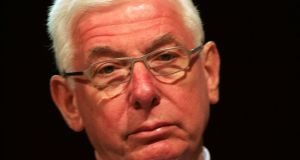 The former Director of Public Prosecutions James Hamilton says the French authorities treated his office with contempt when they failed to notify him that they were sending a police team to Ireland to investigate the murder of French film producer Sophie Toscan du Plantier.

Mr Hamilton said his office received no communication from investigative French magistrate Judge Patrick Gachon before he sent a team of police officers to Ireland in October 2011, two years after the judge visited the scene of Ms Toscan du Plantier’s murder in west Cork in 2009.

“Not a phone call, not a letter – to be quite frank, I think it’s quite extraordinary, it’s a very mild word and I won’t say any more than that – it shows a contempt for the office of the DPP in my view, it shows an arrogance and a contempt,” he said.

Mr Hamilton made his comments during an interview with two English journalists, Sam Bungey and Jennifer Forde for their 13-episode podcast on the murder of Ms Toscan du Plantier entitled West Cork for Amazon’s online audio bookseller, Audible.

Mr Hamilton also strongly defended his decision not to prosecute suspect Ian Bailey for the murder of Ms Toscan du Plantier whose badly beaten body was found near the entrance to her isolated holiday retreat at Dreenane in Toormore near Schull on the morning of December 23rd, 1996.

Mr Bailey was twice arrested and questioned about the murder by gardaí who felt that he should have been charged, but Mr Hamilton said that he fully agreed with a review of the Garda file by DPP solicitor, Robert Sheehan, who concluded there was insufficient evidence to charge Mr Bailey.

“You have to have sufficient evidence – the police will tend to overstate their case compared to the prosecutor’s estimation of it . . . they will concentrate on the stronger points and they will gloss over the weaker points – they want to have solved the case and they want a successful outcome.”

In his 2003 review, Mr Sheehan said he believed that gardaí had created a climate of fear and suspicion in Schull about Mr Bailey and Mr Hamilton said that there was always a risk in such a scenario that witnesses could become contaminated and influenced by the mood of the community.

“They’ve heard all sorts of rumours about what somebody might have done or something else and it’s suggested to them that they are certain things that might be significant if they could remember them and so on, then they may miraculously remember things that never actually happened.”

Mr Hamilton said that he was aware that some observers were suggesting that he should have directed a charge against Mr Bailey so that the matter could go to trial and be clarified once and for all, but he believed such an approach was wrong as it would be an infringement of a citizen’s rights.

“It is a very heavy thing to charge somebody with an offence. It’s something you don’t do lightly, sometimes people will say ‘Why don’t you just run the case in the court and let the court decide?’,” he said.

“We’ve always taken the view that would be a quite irresponsible thing to do, to put a citizen through the ordeal of a trial merely [so that] a sort of public curiosity could be satisfied and that’s what it would amount to,” he told the podcast.

The podcast, which the husband and wife team of Mr Bungey and Ms Forde spent three years working on and which also features interviews with suspect Ian Bailey and Ms Toscan du Plantier’s family, is available for download from February 8th.