Coolock gang violence is a complex web of shaky loyalties 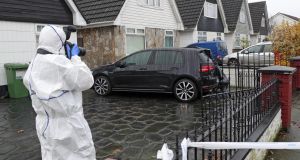 Gardaí attend the scene of a shooting which claimed the life of Eoin Boylan, on Clonshaugh Avenue, Dublin. Photograph: Colin Keegan/Collins

All indications suggested 22-year-old postman Eoin Boylan, known to his friends as “Fishy”, was murdered as part of a gangland feud among drug dealers in the north Dublin suburb of Coolock.

What is not clear, however, is why he was killed. The situation in Coolock is, in the words of one Garda source, “extremely dynamic”.

To put it another way, it is a massively complicated web of violent criminals which has links to separate – but related – gang violence in Finglas and Drogheda. Most of those involved are young men who take a lot of cocaine. This means tempers can be quick to flare and the preferred method of conflict resolution is frequently a bullet.

There are about half a dozen possible explanations for the murder of Boylan, a street-level cocaine dealer.

Possibly the most likely motive is Boylan’s friendship with Zach Parker, a mid-level Coolock drug dealer who was shot dead in Swords in January. Gardaí believe Parker was targeted because he owed money for a €50,000 consignment of drugs which had gone missing.

These drugs had been supplied by an emerging Finglas-based gang which acts as one of the main Dublin distributors for the Kinahan cartel.

A friend of Parker’s, Sean Little, had allegedly threatened to avenge his death. In May, Little was also shot dead, kickstarting one of the most violent periods in the feud.

The next day, another associate of Parker’s, who cannot be named for legal reasons, was shot dead in north Dublin.

A week later Hamid Sanambar was murdered as he left Little’s wake. It is suspected the Iranian was shot by Little’s associates, who believed he may have been involved in his murder.

Because Boylan was close friends with three of the murdered men and was known to Sanambar, the Garda investigation will examine if the deaths are linked.

Boylan may also have been killed by associates of Little for a Facebook post he made which was perceived by some as being disrespectful to Little.

Another possibility is that Boylan was killed as part of a feud between Little’s associates and two brothers from Coolock who are heavily involved in the drug trade. Little also had links to one of the criminal factions involved in the gang violence in Drogheda which has resulted in two murders this year.

Aside from the murders of five men, there has also been a spate of drive-by shootings and petrol bombings in the Coolock area this year.

The fluid nature of the allegiances in Coolock represents a particular challenge for gardaí. Unlike in the Hutch-Kinahan feud, the motivations for the Coolock murders are not immediately obvious, even to experienced detectives.

What is obvious is that the Coolock criminals and their associates have the potential to eclipse even the Kinahan and Hutch gangsters in terms of savagery.