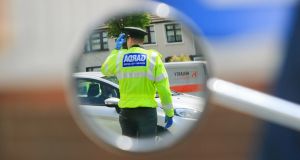 Member of the Garda at a checkpoint in Dublin. Photograph:Gareth Chaney/Collins

Gardaí used their Covid-19 policing powers just 13 times in the past week, a significant drop on the level of enforcement in previous weeks.

Over the bank holiday weekend, despite significant numbers leaving their homes for recreational purposes, enforcement was only required on six occasions.

It has also emerged that very few suspects were being arrested, with the vast majority having their name and contact details taken by gardaí pending further action.

Gardaí used their enforcement powers 289 times between April 8th, when the new powers came into effect, and last Saturday, May 30th.

Some 61 of those incidents resulted in at least one arrest and on 43 of those occasions the arrests were made under the public health measures. It means when gardaí have decided to take enforcement action against people flouting the public health regulations, about one in seven suspects have been arrested with the remainder having their details taken.

Garda Commissioner Drew Harris said while some spitting attacks had continued against members of the force, there was overwhelming compliance shown by the hundreds of thousands of people gardaí had engaged with on foot patrols and at Covid-19 checkpoints.

He added that of the 289 enforcement cases to date, some 76 cases had already resulted in a criminal charge or summons being issued with the remainder still under investigation. Some incidents involved charges against several people.

Under the powers granted to them since April 9th for their Covid-19 policing operation, gardaí can stop people and ask people about their movements. If members of the public are found to be more than 5km from home without a valid reason, such as for shopping or to perform an urgent family task, they are directed to return home. It is only when people refuse to comply that enforcement arises.

Breaches of the Health (Preservation and Protection and other Emergency Measures in the Public Interest) Act 2020 carry a penalty of up to six months in prison and a €2,500 fine.

Also in the week to last Saturday, there were eight attacks during which gardaí were deliberately spat at or coughed at, bringing to 88 such attacks since the Covid-19 policing operation began. Gardaí have used spit hoods, placed over a suspect’s head to prevent them spitting, a total of 66 times; with use of the hoods slowing markedly.

As well as the actions taken against people for breaking the public health regulations, there had been 1,878 other crimes detected by gardai during the course of the Covid19 policing operation. These included public order offences, drugs and weapons crime, drinking driving and other motoring offences.

“Many individuals, families and small groups took advantage of the good weather over the weekend to enjoy the bank holiday weekend and avail of physical exercise. Most did so with the best efforts to comply with public health guidelines,” Mr Harris said.

He added the Garda would continue to monitor beauty spots, parks and other public amenities. The approach would remain focused on engaging with people, explaining the rules, encouraging them to comply and only using enforcement as a last resort.

From March 12th to June 1st the Garda National Vetting Bureau (GNVB) had processed 29,090 vetting applications for Covid-19-related roles across the health system and voluntary sector. There was an average turnaround time of one day for a vetting application.