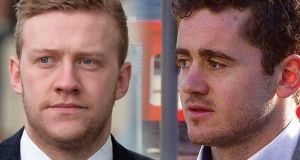 The alleged rape of a woman by Ireland and Ulster players Paddy Jackson and Stuart Olding “is a throwback to the days of male entitlement”, a jury has been told.

This morning, seven weeks after the beginning of the trial at Laganside Crown Court, prosecution counsel Toby Hedworth QC began his closing address to the jury.

Mr Jackson is alleged to have raped and sexually assaulted the then 19-year-old Belfast student in his bedroom during a gathering in his house. Mr Olding is accused or orally raping her at the same time. Their friend Blane McIlroy is alleged to have then entered the room naked and told the complainant: “You fucked those guys. Why not me?”

A fourth man, Rory Harrison, is accused of trying to cover up the alleged rape by giving police a misleading statement and deleting relevant text messages.

“The evidence has shown, we submit, that the first three defendants were not interested in the views of a young woman when their passions are up and they’re full of drink,” Mr Hedworth told the jury.

“What happened in his [Paddy Jackson’s] bedroom, we submit, is a throwback to the days of male entitlement”.

Counsel told the jury, “the law of this land is that a young woman is allowed to say no”.

He said it’s not a case of: “if she was up for something then I, and my friends, can do as I and we please”. Counsel said: “the world has moved on”.

Addressing the defence case that the woman was interested in having sex with Mr Jackson because he was a celebrity, counsel pointed to the woman’s statement that “I’m not attracted to celebrities. I didn’t know who those people were.”

She had seen Mr Jackson once several months before in a bar but she wasn’t aware of him being in Ollie’s nightclub that night before they all went back to the house.

Mr Hedworth noted the woman said she kissed Mr Jackson in his bedroom at one point. “It was completely consensual, although instigated by Mr Jackson,” counsel said.

“If this is a silly girl who has done something she has regretted and has made up a pack of lies, why would she say the first encounter was completely consensual?” he asked. “Unless in fact she was telling the truth.”

Mr Jackson (26), of Oakleigh Park, Belfast, has pleaded not guilty to rape and sexual assault in the early hours of June 28th, 2016 at a party in his house. Mr Olding (24), of Ardenlee Street, Belfast, denies one count of rape on the same occasion. Both men contend the activity was consensual.

Counsel asked the jury to bear in mind the defence suggestion that: “this is a silly girl who’s willingly done something she now regretted, who amongst these macho young men had been the empowered individual in control of the first three defendants and using them in turn for her own gratification at the age of 19 with none of her friends present”.

Mr Hedworth pointed to the woman’s worry about getting the morning-after pill. Why would she be so concerned with this if intercourse had not taken place, he asked. The defendants say no vaginal intercourse took place, just oral sex.

Counsel said the woman can “surely” tell the difference between vaginal and oral sex.

Addressing the defence criticisms of the complainant’s account, counsel told jurors they “must guard against making assumptions on how you expect [a complainant] in those circumstances to behave.”

“What about the delay in reporting to the police? We submit it’s not a point at all.” The woman didn’t attend a police station until the following day.

He said one of the purposes of the clinic attended by the woman on the day of the rape is to preserve evidence for the future in case a complainant decides she does want to go to police at some point.

He pointed to a text she sent to a friend in the hours after the alleged rape stating: “Worst night ever. So I got raped.” He also highlighted other texts she sent that morning going into the details of the alleged rape.

The woman also texted her friend saying she doesn’t want to go to police because, “[the accused] will have the same fabricated story about me being some slut who was up for it.”

Another message read: “You know what they’ll say. I was up for it. Stupid little girl who has done something, then regretted it. I know the stance they will take.”

Mr Hedworth told the jury the woman was “spot on. That is the stance they took”.

Addressing the defence point that the woman didn’t tell her friend about being orally raped, Mr Hedworth asked: “Is she going to give a formal account to her friends of what happened?

“Secondly she explained to you she didn’t actually know forced oral sex amounted to rape.”

She didn’t mention oral sex or rape at the first clinic she visited afterwards because she was there to get the morning after pill and check for sexually transmitted diseases, counsel said.

“We do not hide from difficulties and inconsistencies” between her accounts to medical examiners and to police, counsel said.

He quoted the woman’s evidence: “I can’t overstate how upset I was in that examination room. It was an extremely stressful situation.”

Counsel said the prosecution “invite you to consider what state the woman must have been in at nine o’clock in the evening in that room.

“How straight is she likely to be thinking at that time?

“Genuine complainants, whether because of shock, trauma or confusion, can give inconsistent accounts of what happened to them.”

“If you’ve been through something like this, a traumatic event, you don’t have every detail worked out in chronological order.”

This is not someone who was going after celebrities, counsel said. He pointed to the fact that the medical examiner had to guess the accused were well-know figures, as the woman wouldn’t disclose it initially.

Mr Hedworth asked the jurors if they really believed Mr Harrison failed to mention a text from the woman alleging lack of consent when he met the other accused for lunch that day.

“Of course he didn’t,”counsel said,

“When you come to this court you do not leave your common sense and you experience of life behind you,” counsel said.

“Do you buy this picture of a young women beckoning a man into the bedroom, a man who she had been fixated with before immediately performing sexual acts on his friends, one after the other,” Mr Hedworth asked.

“Good schooling, a good rugby career, even an act of kindness at a bus station count for nothing when they are used to disguise the realities of overbearing drunk young men, with raised passions,” he said.

“They knew she didn’t consent to what she was doing but they were simply not interested,” counsel told the jury. “One, then another, joins in, then another hopes to.”

Referring to Mr Harrison, who comforted the complainant afterwards and told her she was a “wonderful young woman” before allegedly trying to cover for his friends with police, counsel said: “Their friend who should have known better shows he is no better than the rest of them.

“She is no longer ‘a wonderful young girl.’ Lets circle the wagons. She’s a silly girl who has done something she has regretted and is causing trouble for the lads.”

Referencing a text received by the accused men after the alleged rape referring to them as “legends”, Mr Hedworth asked: “The lads? Legends? You decide.” He invited the jury of eight men and three women to find the four men guilty.