Analysis: Policing Authority to be quizzed on whistleblowers 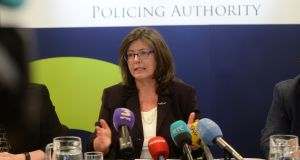 When Josephine Feehily appears before the Oireachtas Committee the week after next she will be asked why her agency declined to meet Ms Galligan and Ms West despite repeated requests. Photograph: Alan Betson

The controversy over the treatment of two Garda civilian whistleblowers after they exposed problems with the classification of homicides is to continue with the head of the Policing Authority being questioned in public.

Whistleblowers Lois West and Laura Galligan said they felt let down by the Policing Authority. They had also been belittled, attacked and put through “15 months of torment” by some Garda officers, though they praised the professionalism of most of their colleagues in the Garda.

Now the chair of the Policing Authority, Josephine Feehily, has been called to appear before the Oireachtas Committee on Justice.

Senior Garda management may also be brought back before the committee to be questioned on the serious matters raised by Ms West and Ms Galligan in evidence they gave to the committee on Wednesday.

Labour TD Alan Kelly, vice-chairman of the Public Accounts Committee, has also called on Minister for Justice Charlie Flanagan to instigate an inquiry into how civilian analysts were treated in the Garda.

Tánaiste Simon Coveney said the claims made by the two civilian Garda staff will be fully investigated by the Department of Justice.

Independents4Change TD Clare Daly yesterday told the Dáil “not only did [the Policing Authority] not respond to them but they went back to the bosses and ratted them out”.

Ms West is deputy head of the Garda Analysis Service and Ms Galligan is a senior crime and policing analyst working under Ms West.

In July 2016 they were asked to review domestic homicides; which include manslaughters and murders. The review was intended to help the Garda improve its approach to domestic violence.

However, immediately Ms Galligan began conducting research she found evidence that homicides had been misclassified. Some of them had been recorded as non-crime incidents, non fatal assaults and a range of minor crimes.

Ms Galligan has also queried whether adequate investigations were conducted into homicides that were misclassified.

Last month, The Irish Times revealed how the women had written to the Oireachtas committee to raise their concerns about the misclassification of homicides.

At that time Mr Flanagan issued a statement denying he had any knowledge of what was reported in this newspaper.

When the women appeared before the committee on Wednesday, going public with their evidence, Mr Flanagan said he was now aware of their concerns.

When the Policing Authority’s Ms Feehily appears before the Oireachtas Committee the week after next she will be asked why her agency declined to meet Ms Galligan and Ms West despite repeated requests last year when they were under pressure because of their whistleblowing.

Ms Feehily will also be questioned about the allegation made by Ms West that when she approached the authority in confidence about what she saw as serious malpractice in Garda management, news of those approaches somehow leaked back to senior Garda management.

“We need to see the organisations tasked with protecting victims of domestic violence and preventing future victims take this issue as seriously and as urgently as it deserves.”