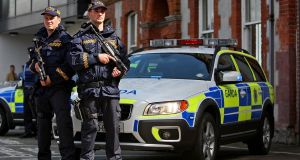 The Garda Armed Response Unit will be on standby in Dublin and will be ready to respond instantly to any significant incident. Photograph: Julien Behal/PA Wire

An anti-terrorism Garda operation is set to unfold in Dublin on St Patrick’s Day aimed at limiting the scope for so-called low cost terrorist attacks like those seen in cities such as Nice and London.

At least 20 large vehicles, including fire tenders and Civil Defence trucks, will be parked at strategic locations along the parade route, including junctions leading into the route.

The measures have been trialled in piecemeal fashion at major events in Dublin over the last year. However, The Irish Times understands St Patrick’s Day will be the first time the full-scale operation will be in place.

The Armed Response Unit and Emergency Response Unit also feature in the special policing plan. They will be on standby in Dublin and will be ready to respond instantly to any incident that requires a significant armed response. The Regional Support Units will be available in other parts of the country.

Garda sources have stressed there is no specific intelligence to suggest Ireland is a target from international terror groups.

“These are practical measures built into the regular policing plan. It reflects the times we live in but its precautionary and there is definitely no need for any concern,” said one experienced officer.

The traditional policing presence of uniformed and unarmed gardaí on foot patrol, crowd control and traffic duties would be most visible on the streets on Saturday.

However, a number of European cities have seen vehicles being driven into crowds by Islamist extremists and resulting in very significant loss of life and injury. Some of the attackers have been self-radicalised and about whom the authorities had no concerns in the lead up to the terrorism they perpetrated.

Garda officers said while parking trucks and fire tenders at strategic locations may appear a basic measure, it is designed to ensure vehicles could not be driven at crowds having built up speed on a street leading into the parade route.

Informed sources said the Garda is determined to do everything in its power to limit the scope of any terrorist attack on the occasion of the St Patrick’s Day parade in the capital.

The same sources said the measure is unintrusive and would not cause undue public concern. Similarly, while the Garda’s armed units would be patrolling, and were available in larger numbers on standby; their presence will be discreet.