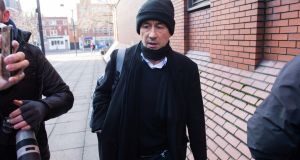 Jailed sex offender Kieran Creaven is likely to face trial in Ireland when he has served the 18-month term imposed on him in the UK on Friday.

Last November, after Creaven was arrested and then charged with attempting to groom and meet with an underage girl, his home was searched in Dublin.

Gardaí took away several electronic devices from his apartment. It was suspected they contained child abuse material.

Since those devices were taken to be analysed gardaí have also succeeded in having Creaven’s social media activity history preserved by executing warrants on social media companies.

It means any messages the former RTÉ sports producer had sent or received on Facebook or Twitter would now be available to detectives investigating Creaven in Ireland.

Garda sources said Creaven’s social media activity was being closely analysed because his conviction and jailing in the UK was for Facebook-based crimes.

The 55-year-old from Dublin had befriended a lot of underage girls on Facebook, which he used under an assumed identity and without ever posting any photos of himself.

However, some of the Facebook friends he thought were young girls were fake profiles being operated by so-called paedophile hunters.

And when Creaven went to the UK last November to meet a girl he believed he was communicating with online, he was challenged on the street by the vigilante group and the police were called.

Gardaí are now trying to determine the extent of his internet-based activities in Ireland. They are examining his computers and other devices to ascertain whether he had groomed and met any other underage girls.

Gardaí also believe he accessed illegal photographs and videos of children and they are trying to find evidence of that.

While he was jailed for 18 months, many sentences in the UK involve 50 per cent remission. It means Creaven may only serve nine months.

Garda sources said he would likely face criminal charges in Ireland immediately he is released in the UK.

And because he could prove a flight risk, and may not want to return to live in Ireland, he may be extradited.

Creaven was in bail since his arrest and attended the court in Leeds every time he was scheduled to.

However, if he has committed more serious offences in Ireland he would face a much longer sentence.

Gardaí believe that may dissuade him from returning to Ireland and may necessitate his extradition.

A spokeswoman for RTÉ said they had no comment to make following the sentencing of the former producer.

In a Facebook Live broadcast outside the Leeds court, a member of the Predator Exposure group said the sentence was a “victory”.

The individual said he was “glad” Creaven would be spending Friday night in jail, where he “won’t be eating caviar”.

“Anybody that comes to England and thinks they’re clever ... we’re gonna get ya, and you’re going to go to jail, simply as,” the member of the group said.

The Northern Irish National Society for Prevention of Cruelty to Children said “Creaven’s victim may have been fictitious, but the threat he poses to children is very real.

“This case shows just how vital it is for parents and others to talk to children about how to stay safe online” a spokeswoman said.