Prosecution homes in on discrepancy as accused take the stand 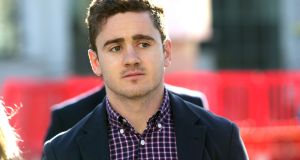 On Wednesday, after 25 days of evidence, the jury in the rape trial of Paddy Jackson and Stuart Olding finally heard from the accused themselves about what happened on June 28th, 2016.

Jackson was up first, and by mid-morning the public gallery, which holds 100, was packed and minor arguments were breaking out over seats. The next day he was followed by Olding, who is accused of oral rape, and on Friday by Blane McIlroy, who is accused of exposure.

Each man’s evidence took up most of a day. In the morning they gave their versions of events to their own counsel. After lunch they were questioned on these accounts by the prosecution.

Regarding the night itself, the three men’s accounts differed little from what they told police, even if that account appeared to contradict that of a co-accused.

The complainant, a 19-year-old Belfast student, alleges she was at a house party in Jackson’s home when she went upstairs to get her handbag. She says Jackson followed her, and pushed her on the bed before raping her.

Jackson told the jury it was the woman who followed him upstairs, where they started kissing and she performed oral sex on him consensually. While this was happening Olding came to the door, and Jackson smiled at him. Olding came over and she started performing oral sex on him.

Jackson denied having vaginal intercourse with the woman, and denied trying to put his entire hand inside her, calling it a “revolting” allegation.

Olding gave evidence that when he opened the door he saw the woman on top of Jackson kissing him on the mouth. He said the woman beckoned to him with her hand and he went over.

She started performing oral sex on him while Jackson was at the other end of the bed, he said. Everything was consensual, and no force was used, he said.

Neither man saw McIlroy in the room. On Friday McIlroy insisted he was in the room; he opened the door to find Jackson and the woman lying naked on the bed. He went in, kissed the woman and she performed oral sex on him.

The prosecution homed in on this discrepancy. Toby Hedworth QC put it to all three men that they met up for lunch in the hours after the alleged rape to concoct a story in case they were interviewed by police.

McIlroy and their friend Rory Harrison, who is accused of perverting the course of justice, knew there could be trouble as the woman had told Harrison “what happened last night wasn’t consensual”. Harrison had dropped the woman home after the alleged rape, and texted McIlroy that she was “in hysterics”.

Yet McIlroy told the jury he never mentioned this to Jackson and Olding at lunch that day in Soul Food Cafe. He said this was because he didn’t take Harrison’s warning seriously as the woman seemed fine when she was leaving. All three men said they didn’t talk about the woman at lunch.

Mr Hedworth called this a ridiculous lie. He suggested the purpose of the lunch was for them to get their stories straight.

The reason McIlroy told the police a story which doesn’t chime with the others was because he “got his lines wrong,” counsel said; he gave Olding’s version of events instead of his own. This was rejected by McIlroy.

The men’s appearance in the witness box also allowed counsel to ask them about the texts they sent the next day boasting about sexual activity. Much of the cross-examination centred on the meaning of the word “spit-roast” which was used by Olding and Jackson in texts (McIlroy also sent a text saying he “roasted” a woman with Jackson).

Mr Hedworth suggested the term specifically means two men penetrating a woman, one orally and one vaginally. Both Jackson and Olding said it could mean that, but it could also mean any sexual activity involving two men and a woman.

All three accused said they were embarrassed by the texts they sent, explaining them variously as “exaggeration”, “nonsense” and “banter.”

In unusually blunt terms, defence counsel Brendan Kelly QC suggested this was typical behaviour for McIlroy, who is known as someone who “talks shite.” McIlroy agreed.

“We were just egging each other,” Mr Jackson said. “It doesn’t really mean anything. It’s just stupid behaviour.”

The evidence stage of the trial is nearly complete, and the jury will likely start hearing closing speeches next week.

As the trial is well behind schedule, the jurors have agreed to sit on Saturday until 12.30pm, when they will learn if Harrison intends to take the stand. Court staff are expecting a queue for seats in the gallery.