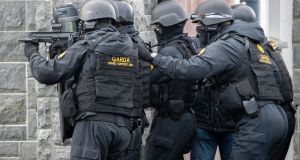 The main representative body for gardaí has said armed detectives should be retained until there are specialist firearms support units in every division.

The comments come after The Irish Times reported this week that large numbers of firearms certificates are being withdrawn from members after a review last year found over a quarter of garda were authorised to carry weapons.

About 1,000 firearms authorisations have since been withdrawn as part of an ongoing programme to bring the garda firearms response in line with international best practice.

The aim is to have the armed support units (ASUs), rather than armed detectives, act as the Garda’s primary firearms response throughout the State.

However additional recruitment to strengthen the ASUs were paused during the Covid-19 pandemic, delaying this rollout.

Garda management plan to have 375 ASU members based in 13 centres around the country which would be able to provide 24-hour armed support.

Jim Mulligan, president of the Garda Representative Association (GRA), which represents some 13,000 rank-and-file gardaí, said there is still a need for armed detectives but that they should receive improved training.

Currently firearms training for detectives focuses on target practice and weapon maintenance rather than tactical use of the weapon.

“GRA policy is that there should be an armed support unit in every division. Until that happens, then we need to have armed detectives with better tactical training to support frontline members in dangerous situations.”

Mr Mulligan said gardaí today face increasing danger from armed criminals. “Our members are being subject to more incidents of armed threat and other potentially lethal dangers. Gangs are feuding in cities and in several regional towns around Ireland and we have seen armed incidents in rural parts of the country too.

“We are particularly concerned about remote areas where members are very vulnerable. We have seen incidents where the armed support unit is three hours away.”

He said there have been “very few examples of arms being discharged by gardaí which shows a highly responsible approach to gun use.”

On Tuesday The Irish Times reported figures obtained from the Garda Ombudsman Commission showing the gardaí have discharged their firearms on 16 occasions in the last four and a half years, resulting in one death of a suspect and several injuries.

On five occasions firearms were discharged accidentally, the figures show.

The figures also show increasing use of less-than-lethal weapons by gardaí. Since 2016 the Taser stun gun has been used 174 times and the 40mm launcher, with fires a sponge-tipped disabling round, was used 12 times.