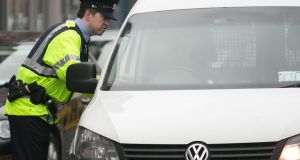 Almost 950 drivers were arrested on suspicion of drink- or drug-driving over the Christmas period.

Almost 950 drivers were arrested on suspicion of drink- or drug-driving over the Christmas period, An Garda Síochána has revealed.

Since a Christmas and New Year road safety campaign started on November 30th, approximately 938 drivers have been arrested on suspicion of intoxicated driving, involving either alcohol or drugs.

One in 10 of those arrested were found to be over the limit after having consumed alcohol the night before.

Gardaí arrested 11 people for drink-driving on Christmas Day. A number of these drivers refused to provide a breath sample and will therefore face a four-year driving ban if convicted.

Checkpoints were in operation across the State over the period amid a Garda crackdown on those driving after drinking the night before.

Under the new provisions of the Road Traffic Act, drivers who are found to have between 50 and 80mg of alcohol per 100ml of blood are automatically banned from driving for three months and receive a €200 fine.

Previously, drivers who tested positive for that amount received three penalty points on their licence.

Separately, provisional statistics for 2018 show the Republic continued to improve its road safety performance by recording a 4 per cent drop in road deaths, making it the safest year on Irish roads since road deaths were first recorded in 1959.

A total of 149 people lost their lives on the roads as a result of 142 fatal incidents last year, compared with 156 lives lost in 141 fatal incidents in 2017. This represents seven fewer fatalities, or a 4 per cent drop in deaths.