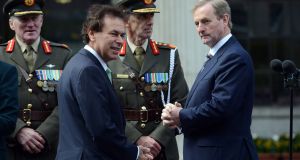 Former justice minister Alan Shatter has said he was “forced to resign” by Taoiseach Enda Kenny and that in some areas Mr Kenny has a casual relationship with the truth.

Welcoming the judgment of the Court of Appeal on Thursday, which found “seriously damaging” conclusions in the Guerin report were made in a manner that breached Mr Shatter’s constitutional rights, the former minister said the last three years were the most difficult of his life.

The Court of Appeal said the Government must decide how to respond to the findings about “seriously damaging” conclusions in the Guerin report, which examined Mr Shatter’s handling of complaints of Garda whistleblower Sgt Maurice McCabe.

President of the Court of Appeal, Mr Justice Seán Ryan, expressed the view that the Government cannot “ignore” the findings.

Mr Shatter on Friday said the way the Taoiseach framed his evidence to the Fennelly commission, which examined the resignation of former Garda commissioner Martin Callinan, as recorded in the report, indicated Mr Kenny had a casual relationship with the truth.

A spokesman for Mr Kenny said the Taoiseach rejected “completely” and “out of hand” the statements made by Mr Shatter.

The spokesman also referred to Mr Shatter’s letter of resignation in 2014, in which he said to Mr Kenny: “ I believe you are an extraordinary Taoiseach doing an extraordinary job during what has been a very difficult time for our country and I want to thank you for all the assistance and support you have given to me.”

The spokesman added: “The Taoiseach rejects the charge made by Alan today.”

Mr Shatter said he had not spoken to Mr Kenny since prior to polling day in the 2016 general election and said he now wanted an apology from Mr Kenny “both for the manner in which he treated me and on behalf of the State”.

“Yesterday was a very important day for me and my family and close friends. It’s all a little bizarre, I felt constrained until we got the point of the court of appeal finalising matters in discussing these court proceedings”.

“I think it’s important to make the point that this all started in a way that’s quite extraordinary. I think most people would regard it as crazy in today’s Ireland that a senior counsel could be asked to conduct an inquiry by government that he would produce a very serious report condemning a Minister, that the Taoiseach would then force that Minister to resign and enormous damage would be done to that Minister’s reputation and without the senior counsel ever asking the Minister a question.”

“The truth is that man [Seán Guerin] never talked to me. So I very much welcome what was decided yesterday.”

‘Wrong to have accepted report’

Mr Shatter said he was “given no choice but to resign. The Taoiseach’s comment was that he could no longer express confidence in me as a consequence of Mr Guerin’s report.”

The former minister said despite Mr Guerin producing a flawed report, “neither the Taoiseach nor any other member of the Dáil placed on the Dáil record that Guerin’s procedures were flawed and that his conclusions were mistaken”.

Mr Shatter said what the Court of Appeal ruling showed what that that any person, including those outside politics, could in future could be wrongly denounced in a report without being given an opportunity to state their case or defend their good name.

The Taoiseach’s spokesman also said the Guerin report has been “been removed from all Government websites” and pointed to a Dáil statement from Mr Kenny on May 25th, 2016, in which the Taoiseach said: “ I am very pleased to acknowledge that the O’Higgins report has found clearly that the former Minister acted properly at all times in relation to the handling of allegations made by Maurice McCabe.”