Ex-tribunal chair conducted ‘all the work’ at centre of complaints

Planning Tribunal has agreed Flood’s findings against businessman were ‘unlawful’ 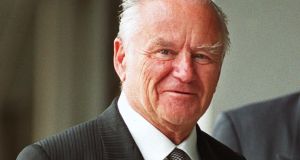 Mr Justice Feargus Flood: he was unable to help the tribunal in its response to pleadings made by Mr Muphy because of his state of health. Photograph: Peter Thursfield

The former chairman of the Planning Tribunal, Mr Justice Feargus Flood, conducted “all the work” which was complained of in the proceedings taken by businessman Joseph Murphy jnr, the tribunal has said.

The former High Court judge who chaired the tribunal from its formation in 1997 to his retirement in 2003, made adverse findings against Mr Murphy which the tribunal has now agreed were “unlawful” and which it has agreed should be quashed.

Mr Justice Flood, because of his state of health, was unable to help the tribunal in its response to pleadings made by Mr Murphy, solicitor Susan Gilvarry said in an affidavit sworn on behalf of the tribunal. The case taken by Mr Murphy has now been settled.

Mr Justice Flood, she said, “conducted all of the work of the tribunal which is the subject mattter of these proceedings involving a preliminary private investigation of the evidence available, public hearings of testimony and, the writing of the [two reports containing the findings which have now been quashed]”.

In the course of carrying out that work, it fell to Mr Justice Flood to decide which of the voluminous documents which came into the tribunal’s possession should be circulated to parties such as Mr Murphy, she said.

She said access to an unredacted transcript of an interview with the late James Gogarty conducted by journalist Frank Connolly, was refused by the chairman in July 1999.

Ms Gilvarry pointed out that Mr Justice Flood had said that he alone was entitled to conduct a preliminary investigation to ensure material not relevant to the tribunal was not tendered at public sittings. The chairman had referred to a Supreme Court decision, Haughey vs Moriarty, to support his view that he had to ensure the tribunal did not encroach on people’s rights.

However the tribunal now accepts, Ms Gilvarry said, based on subsequent Supreme Court rulings, that the redacted evidence should have been given to Mr Murphy because of its potential relevance to the credibility of Mr Gogarty. Mr Gogarty’s allegations led to the findings against Mr Murphy.

The redactions made by Mr Justice Flood were made in “good faith” and a belief that it was an appropriate discharge of his duties.

The tribunal rejected any allegation of “a general unfairness and lack of due process” in the procedures adopted by Mr Justice Flood, she said.

Ms Gilvarry said that prior to a Supreme Court decision of 2005, it was not the tribunal’s practice to circulate transcripts of interviews conducted in private. In a number of specific instances, she said, they were referred to during the course of public hearings.