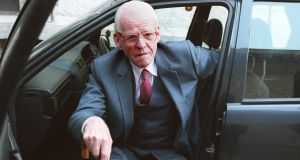 New material given last year to Joseph Murphy jnr by the Planning Tribunal shows a “pattern of non-disclosure that can only have been conscious and deliberate”, the businessman said in an affidavit.

He said the material included a transcript of a private interview with the tribunal in November 1998 in which Independent TD Tommy Broughan said that the late James Gogarty had said that he, and not Mr Murphy, had handed money to former government minister Ray Burke in Mr Burke’s home in 1989.

Mr Broughan and Mr Gogarty were not asked about this in public evidence, Mr Murphy said. It was “incredible” that the tribunal had not told him what Mr Broughan had told the tribunal in private, and also incredible that it did not raise the matter with Mr Broughan in public testimony despite its probative value.

However, the tribunal, in an affidavit responding to Mr Murphy, disputed this claim, and said a note taken by Mr Broughan of his interview with Mr Gogarty was referred to in evidence, and the note was circulated. Mr Murphy’s interpretation of what occurred does not have the significance he sought to attribute to it, the tribunal said.

Material that came from journalist Frank Connolly and which could have been of use to him, was also kept private by the tribunal. “This content would certainly have been used to undermine the credibility of Mr Gogarty. However it was kept from me and my lawyers.”

The affidavit was sworn in a case which has now been settled after the tribunal agreed to quash key findings alleging a corrupt payment by Mr Murphy and his late father, Joseph Murphy snr, to Mr Burke. It has also quashed a finding in relation to a payment to the late George Redmond.

Transcripts of a series of private interview conducted by the tribunal were given to Mr Murphy last year after he sought them from the tribunal, having become aware of their existence in the media.

Mr Murphy said the planning tribunal came into being after media reports emerged of an alleged payment to Mr Burke. It subsequently emerged that Mr Gogarty was alleging that he had been at a meeting with Mr Burke and Mr Murphy, at which more than £40,000 was given to the politician. “This claim was simply untrue,” Mr Murphy said.

He said Mr Gogarty had been involved in a bitter dispute over his pension and had “an abiding hatred of me”.

As Mr Gogarty was the only person alleging the corrupt payments, the issue of his credibility was crucial for the tribunal. However, from the beginning the tribunal sought to “cosset” Mr Gogarty.

It refused to give Mr Murphy an audio recording of a lengthy interview with journalist Frank Connolly, who had first reported the alleged payment in the Sunday Business Post.

He was in particular “shocked” by the tribunal’s failure in respect of the evidence of Mr Connolly. The journalist had informed the tribunal at a preliminary interview stage of a “great many wild allegations which Mr Gogarty recounted to him concerning any number of individuals”.

Mr Murphy said everything he said to the tribunal was not believed unless he could prove it, while Mr Gogarty’s evidence was “assumed to be true”.

The tribunal’s findings in 2002 that he had made a payment to Mr Burke led to Mr Murphy gaining “pariah status”. He was privately asked not to attend a wedding as his presence would attract attention from the bride and groom. He was verbally abused by strangers and once he was spat upon.

The tribunal’s findings also had dramatic consequences for him and for his business, JMSE, which closed in March 2000 with the loss of more than a hundred jobs.

He took a successful Supreme Court appeal in 2010 against cost orders made against him, on the basis that he had not been given access to all allegations made by Mr Gogarty, a matter that went to Mr Gogarty’s credibility.

However, the receipt of the private interview transcripts in 2016 showed that there was a “pattern of behaviour on the part of the tribunal as a whole that involved the widespread non-disclosure of material that would have been extremely damaging to Mr Gogarty, and therefore of great assistance to me”.