‘At no stage’ did it ‘express anything other than confidence’ in capacity to do job, Garda Commissioner says 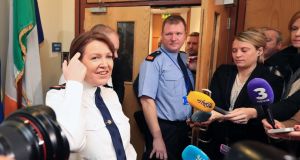 Garda Commissioner Nóirín O’Sullivan has said concerns expressed by the chairwoman of the Policing Authority last week were never raised with her.

Ms O’Sullivan implied that Josephine Feehily’s questioning of her ability to deal with the Charleton tribunal and simultaneously run a Garda reform programme were not consistent with her previous comments.

Last week Ms Feehily said she had a “degree of confidence” in Ms O’Sullivan’s ability to lead the Garda force at a time when great reform was underway while also satisfying the tribunal, which is investigating the Garda chief.

In her first comments since Ms Feehily’s remarks, Ms O’Sullivan said the authority had never raised those concerns with her in either the private or public meetings both parties had held.

“We discussed in detail, at both private and public meetings with the authority, and at no stage did the authority express anything other than confidence in our capacity to do the job,” Ms O’Sullivan said.

She was replying to a question about whether Ms Feehily stopping short of expressing full confidence was disappointing to her.

Ms O’Sullivan was speaking to reporters at the launch of a new 24-hour Garda telephone line for those who wish to report current or historical sex abuse.

Pressed on whether she would be “distracted” from leading the force because of the need to deal with the tribunal, which is investigating allegations against her, Ms O’Sullivan did not believe that would be the case.

“At the same time we have to keep our foot on the pedal, so to speak. We have to make sure that we are there protecting our communities.”

She cited the Garda investigation into the murder of pensioner Paddy Lyons in Ballysaggart, Co Waterford, last weekend and series of 13 drug related arrests in Dundalk, Co Louth, as an example of the Garda working that would continue despite the need to engage with the tribunal.

“We are doing the job we have always done in protecting our communities. That’s where our focus will remain. That won’t change and we will continue to do that.”

Asked whether she was concerned about the influence her position as the head of the force might have on those serving Garda members who would be giving evidence she said it was not a concern.

“The tribunals have their own way of operating,” she said, adding Mr Justice Charleton would run “the rules of engagement”.

The Garda had a depleted senior team since 2014 but positions had been filled of late or were currently being filled. It meant there was strong leadership in place to run policing.

Separately, she added, a team of officers had been appointed to deal with the tribunal on behalf of the Garda organisation.

She also said she was “no stranger” to working under pressure or with reduced resources.

Speaking on the Today with Sean O’Rourke programme on RTE Radio 1 last Friday, Ms Feehily said she was concerned about the “closed culture” of the Garda.

While she said it was not necessary for Ms O’Sullivan to step aside pending the outcome of the tribunal, her expression of confidence in the Commissioner was less than fulsome.

She also expressed confidence in the ability of Ms O’Sullivan and her senior team to “run the guards” but there was “a degree of concern” about her modernising the force and also dealing with the tribunal all at the same time.

“It’s a whole-hearted endorse in terms of her and her team’s capacity to run the guards. It’s the, how will I put it, the parallel running of a very complex organisation that does need to keep the foot on change and modernisation, while servicing a tribunal.

“And until that starts to play out, I’m simply saying we don’t know.”

The Charleton tribunal will investigate how the Garda force reacted to Sgt McCabe and his whistleblowing, specifically whether former Garda commissioner Martin Callinan planned a smear campaign to discredit him.

It will also examine whether Ms O’Sullivan, knew of that alleged campaign or participated in it.Ms O’Sullivan has stated she did nothing wrong.