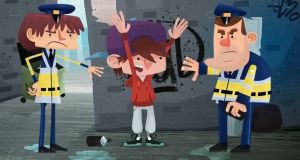 Screenshot for a new animated short featuring the story of “Buddy”, which aims to deter young people from causing damage to public and private property

An estimated €1 million was spent on removing graffiti in Dublin last year, according to a new campaign which seeks to reduce graffiti damage to buildings across the capital.

Dublin City Council has teamed up with An Garda Síochána to raise awareness among children about the repercussions of tagging and graffiti through the Graffiti is a Crime, Think Don’t Tag campaign.

As part of the campaign, a new animated short featuring the story of “Buddy” and his spray painting around Dublin will screen in Irish cinemas in the coming weeks in the hopes of deterring young people from causing damage to public and private property.

Speaking at the launch of the campaign in Dublin, Insp Liam Geraghty said young people often defend graffiti as art and fail to recognise the victimisation of the act.

“Art is in the eye of the beholder and at An Garda Síochána we’re not art critics by any means but the question we would ask groups is if this is something you would be happy to have on the front of your own house or garden wall?”

Asked to note the difference between “street art” and graffiti, Insp Geraghty said the definition was based on whether a person had permission to spray paint on a piece of property.

Those caught damaging property or found in possession of any item likely to be used to damage property can be arrested and, if convicted in the District Court, imprisoned or fined up to €2,500, said the inspector.

Last year an estimated €1 million was spent removing graffiti in Dublin with Dublin City Council receiving 942 requests for removal of graffiti in the 12 months. “This is money that could be far better spent on playgrounds, parks, recreation facilities in your area.”

By aiming the campaign at children aged 8-12, Dublin City Council and An Garda hope to educate young people about the consequences of graffiti before they begin picking up spray cans in their teenage years. Despite the presence of graffiti on buildings across the State, the campaign is focused on reducing graffiti in the capital where it is most prevalent.

“Dublin is a vibrant city but regrettably graffiti is prevalent in many of our public spaces,” said Lord Mayor of Dublin Brendan Carr at the launch of the campaign. “For the kids who are here today it’s your future, it’s your city, you be proud of it and make sure your friends are as well.”

The Think Don’t Tag campaign is set to run over the next six weeks with posters across the capital. Meanwhile, An Garda Síochána is set to propose to the Department of Education and Skills that the animated short be included in the Garda primary schools programme.