Man (21) charged with murder of father in Co Waterford 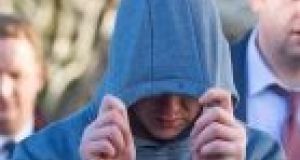 John Butler (21) has been charged with murdering his father John in Portlaw, Co Waterford, last weekend.

A 21-year-old has been charged with murdering his father in Portlaw, Co Waterford.

John Butler, who was 48, died following an assault last weekend on Brown Street in the town.

The older man was rushed by ambulance to hospital but later died.

His son Stephen Butler was charged with assault causing harm on Sunday in Carrick-on-Suir District Court but this was upgraded on Thursday to murder.

Garda Sharon Ryan told the court that she charged the defendant, who has an address at Shielbaggan, Ramsgrange, New Ross, Co Wexford, at 10.32 am.

He made no reply when charged.

Solicitor Ken Cunningham said a bail application will be made to the High Court and Judge Terence Finn remanded Stephen Butler in custody to Limerick Prison.

He is due to appear in Carrick-on-Suir District Court again on February 6th.